The Vagabond is celebrating 50 years of service to their most valued and dedicated customers.

Owner Jolene McBee told the Breeze “I came to the Vagabond in February 1975. I wasn’t really looking for a job as I had four children at home  . My sister worked there and asked me to come and help out until the manager could hire someone. I could just work half a day and I’d be home before my kids got home. So, I said, okay.”

“Vagabond opened in 1966. Mr. McBee was the manager at the time, working for  Duke Carter, the original owner of the Vagabond. He worked for  Carter for 19 years and was allowed to operate the restaurant like it was his own. When I started there he was supposed to hire someone else,. As it turned out, he never hired anyone else and a 1979, Mac and I were married.” 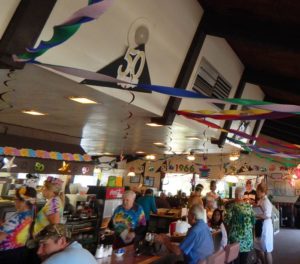 “Six years later, Mr. Carter was ready to sell the business. We purchased it and worked  together. We both had the same goals…to offer our customers good food and good service at a fair price. Sadly, we lost Mac in 2003.”

“A lot of restaurants refer to themselves as “a family restaurant”. Vagabond truly is that. Over the years, a lot of people have come to recognize that the Vagabond is different from most businesses, that it is much, much more than just a restaurant. It is a very special place. A place where friends gather to enjoy each other’s company over a good meal. Where executives meet to discuss business over a quick lunch. Where a loan diner can come and have a meal and feel comfortable and safe and welcome. “

“On numerous occasions, customers have come to me and said “don’t ever change” and “don’t ever go away”, because there is no place like Vagabond. “

“Their stories are many  like the young boy who had a life-threatening illness and the Make-A-Wish foundation granted some of his wishes. One of which was to arrive in a limo and have dinner at the Vagabond. “

“In the past few years, I have had some health issues that have affected my ability to do things the way I used to do them. In spite of that, I still go to the restaurant almost every day. I know the place would operate just fine without me, but I go because it is where the people I love are. It is my special place in life. “

“It has been our privilege, our pleasure and an honor to have been of service to so many for so many years. Many thanks to all of you for allowing us to do so. “

The Vagabond is located at 760 E. Thompson so stop in and say hi to Jolene and her wonderful staff.