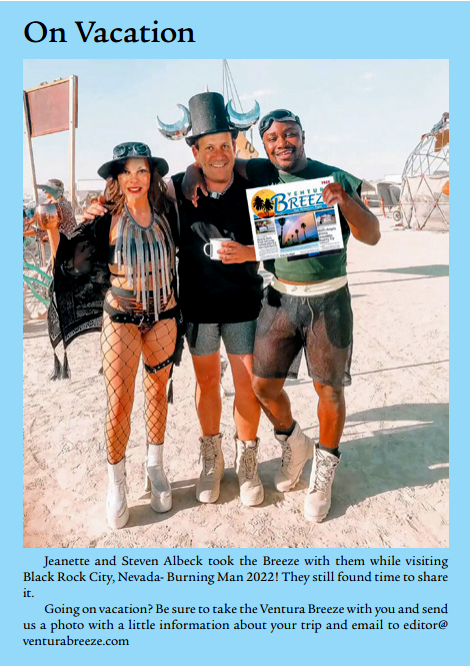 Who was able to read the Breeze first?

On October 20-27th, a delegation of 15 people from the Ventura Sister City Association (VSCA) went down to Ventura’s first and only Sister City, Loreto Baja Sur, Mexico, to participate in the 325th year of Loreto’s founding. Loreto served as the first capital of California, and it has ties to Ventura through its Mission and the headquarters for the five island Mexican National Park off of its coast in the Sea of Cortez.

The trip included a visit to San Javier, an older mission in the Gigante’ Mountain range, boat rides out to the islands, a stop at a working ranchero where goats are raised, visits with artists, the Loreto Fire Department and a foster home and a beach clean-up. Additionally, we had an orientation session with Eco-Alianza, on organization that supports and collaborates with, which is dedicated to environmental protection of the Sea of Cortez and promotion of ecotourism.

Most importantly, the delegation got to participate in the four-day celebration of Loreto’s founding, including the presentation of a proclamation from Ventura’s Mayor and City Council to their Mayor and Council. Pictures and a video of the trip can be found on the Ventura Sister City Facebook page.

This is the second year in a row that the VCSA has partnered with the Hermosa Beach Sister City Association (HBSCA), as Hermosa Beach has been a Sister City of Loreto for 55 years. Beyond the October visit, which coincides with Loreto’s founding on October 25, 1697, the VSCA is working on developing trips to enhance our purpose of building cultural exchanges in the arts, with our museum and with our schools. If you are interested in getting involved with the Ventura Sister City Association, please visit our webpage at VenturaSisterCity.org.

Rubicon Producing Artistic Director and Co-Founder Karyl Lynn Burns retired from the company on Sunday, November 13, following the acclaimed sold-out run of In the Heights. Says Burns, “It’s been a long and beautiful run and Jim [O’Neil] and I will forever be grateful to those we’ve met during our 25 years in Ventura who have taught us the meaning of community and showed us what can happen when dedicated and passionate people come together in pursuit of common goals. We are looking forward to beginning a new chapter, and to spending more time with each other and our families.”

“What we’re most excited about,” continues Burns, “is the opportunity to pass the torch to two longtime friends and collaborators, Beverly and Kirby Ward. They are multi-talented, incredibly diverse veteran performers with West End, Broadway and National Tour credits. After years of knowing them and working together at Rubicon, we have complete faith in them and trust that, with continued board and community support, they will take the company and the art to new heights.”

Burns and husband James O’Neil co-founded Rubicon in November of 1998 and have led the organization for nearly 25 years. During their tenure, the company has produced more than 160 comedies, dramas and musicals, including more than 20 world premieres. Under Karyl Lynn and Jim’s leadership, Rubicon received numerous awards, including the L.A. Drama Critics Special Award for Sustained Excellence, two New York Drama Desk Awards, Ovation Awards for Best Production of a Play, Larger Theatre (for Arthur Miller’s All My Sons and Gulf View Drive by Arlene Hutton), and an NAACP Award. Rubicon has taken five shows to New York and has also toured productions across the U.S. and to Tokyo, South Korea, London and Dublin. In addition to mainstage programming, Burns and O’Neil have produced festivals, special events, a Broadway concert series and extensive educational programming for young people ages 6-23.

The Wards have a long history at Rubicon, freelancing as directors and actors at the company since 2008. They stepped into ongoing administrative/creative staff positions in 2018 and were responsible for the direction and choreography of Rubicon’s critically acclaimed, sold-out run of Big River in 2019. The couple have worked together on stage and off for nearly half-a-century. They bring with them West End, Broadway, Off-Broadway, and National and International Tour credits.

Says Board President Doug Halter, “This is an ideal succession plan for the company that we all have been quietly working on together for some time and we are pleased to share the news with the public. We as a board and community owe Karyl Lynn and Jim a great debt for their many years of service,” adds Halter, “and for giving Ventura the gift of a professional not-for-profit theatre that we know and trust will be here for generations.”

Says Burns, “Parting with people and places you love is always sweet sorrow, but we leave knowing that this is the right time to infuse new vitality and vision into the organization as Bev and Kirby move Rubicon from a founder-driven organization to a strong and sustainable institution. There’s so much more to say; we look forward to time to express our gratitude personally to those who have made this Rubicon journey possible.”

True to the company’s name and the vision of founding artistic directors Karyl Lynn Burns and James O’Neil, Rubicon has created an environment where commitment and risk are encouraged, and where artists are nurtured and respected. As a result, the company has gained a reputation for invigorating interpretations of the classics and for supporting the development of new works. Rubicon presents at least one World Premiere each season, as well as readings of works-in-progress.

There are lots of ways to get involved.

Food Share, Ventura County’s largest hunger-relief organization, is bringing its most popular community event back for the holidays! The 11th Annual Can-tree food drive will take place in Figueroa Plaza from Thursday, December 1 when the trees will be built, through Sunday, December 4, 2022, when they will be dismantled.

The event, which brings thousands of individuals, families, and local businesses together to collect and build hundreds of canned food “trees” is Food Share’s biggest food and fund drive of the year and is a critical source of food for the thousands of people still struggling with food insecurity in Ventura County.

There are lots of ways to get involved. Participants can Collect & Build, Buy & Build, Raise & Build or Sponsor a Tree. There’s also a chance to win one of 13 coveted awards including the CAN Crusher, the People’s Choice, and the Mayor’s Choice, all of which will be featured on Food Share’s website, social media pages and newsletter.

Food Share is serving three times the number of people being served pre-pandemic. The latest figure (total for 2021) is a little over 190,000 unduplicated people based on FreshTrak data. However, this figure does not include people attending emergency drive-thru distributions, some of our programs, including Community Markets, or farmworkers receiving food at field distributions. The total number being served annually is @220,000.

For more information visit: foodshare.com/cantree or reach out to Jess Hug, at jhug@foodshare.com.

The City of Ventura, in partnership with Home Instead, is seeking gift donations for this year’s Santa to a Senior program, hosted now through December 13. All donations are given to local seniors enrolled in the Ventura Avenue Adult Center’s Senior Nutrition Meal Program.

“This program has existed since 2018, and between 200 to 250 seniors benefit from it each year,” said City of Ventura Recreation Manager Emily Fox. “It’s a wonderful way to spread some holiday cheer, especially to the homebound seniors in our community.”

There are two ways to donate to the Santa to a Senior program:

1) Participants can visit the Santa to a Senior holiday display trees at City Hall near Room 226 or the Ventura Aquatic Center to choose a specific gift request directly from the tree.

2) Participants can purchase a gift from the general wish list and drop it off at one of the designated Santa to a Senior drop-off locations.

Alex McIntyre has served as the City Manager of the City of Ventura since November 2018.

The Ventura City Council has announced that City Manager Alex D. McIntyre has been placed on administrative leave pending Council direction on a private personnel matter.

Even though the reason was not stated it is assumed that it is because in March some members of the City Council took a trip to Washington D.C. for legislative matters. Council members on the trip violated the Brown Act, the state’s open meeting law, by holding meetings without proper notification and agenda publication. In a separate September 2021 trip, McIntyre used his state-issued credit card to pay for dinner and wine for eight people during a business trip to Sacramento.

On the evening of November 3, 2022 the Joseph P. Reardon Funeral Home & Cremation Service of Ventura proudly opened its doors to all of greater Ventura County for the eighth annual Candlelight Remembrance Service.  This was a special evening for anyone who has experienced a loss and wished to remember their loved one in a sacred space.  This moving night of remembrance and reflection featured several speakers from Assisted Hospice of Ventura.

Michael Boyko, owner of the funeral home stated “we again are so proud to be able to host this evening for our entire community in need of reflection, consolation, and care.  Moreover, I remain humbled to be able to provide such a touching ceremony with the entire highly professional staff of Assisted Home and Hospice of Ventura.  Our community really needs this type of service and we know we are reaching people who need it as attendees are from all walks of life and from many different communities in Ventura County.

This evening featured live harp music from Ted Nicholsen, professional harpists from the peninsula hotel in Beverly Hills as well as the officiant Dr. Paul Lenderman, Spiritual counselor/grief coordinator of Assisted Hospice in Ventura.  Dr. William and Dr. Lisa Rajala also took time and spoke with spiritual poems and readings of consolation.  Spiritual Counselor Raquel Jensen and Social Worker Susan Derby also participated with life affirming prayers and tributes to loved ones and patients that have passed within the last several years.  Marianne Cody of Assisted Hospice helped coordinate the evening and assisted participants with candle lighting and placement.

Michael went on to say “no one can tell you how to grieve.  I believe a ceremony like this one is just one more way we can be of service to our community. Our funeral homes offer a helping hand to all who need it no matter the circumstances.  Yesterday, today, and tomorrow we’ll be here to help”. 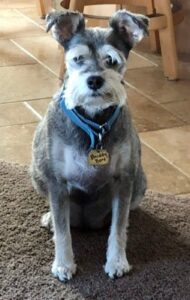 Hi: I’m Buddy Boy, a 6-year-old Schnauzer X in need of a new home as my owner passed away and no one could take me in. I came in with Lucy Lou and we wouldn’t mind staying together, but we don’t have to be adopted together.

I’m good with people, but would do best in an adult only home. I’m good with other dogs, but it’s unknown how I’d do with cats.

I’m a little overweight, so I’ll need someone who will take me for daily walks. 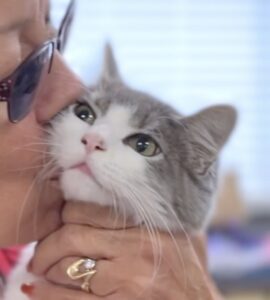 Meet Buzz! He’s an adorable 5-month-old, domestic shorthair cat. He’s been in foster care and has done great with dogs and cats. He’s playful and loves to cuddle! Learn more about Buzz at https://www.vcas.us/viewan-2/?ida=A803359. VCAS