Skatepark project expands the skatepark by more than 20,000-square-feet. Photos by Patricia Schallert

The City of Ventura received a nearly $2 million grant from the state’s “California Outdoors for All” initiative to fund construction to expand the skatepark at Westpark, located at 450 W Harrison Avenue.

“This is an exciting win for Ventura, especially for our families living on the Westside,” shared Mayor Sofia Rubalcava. “This grant will do so much good in our community. An expanded skatepark will provide more space and opportunities for our kids to play outside and enjoy more recreational activities.” 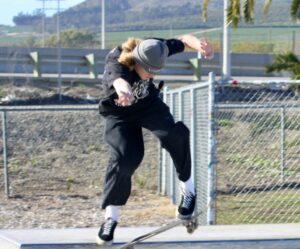 The existing 3,200-square-foot park is one of three skateparks in the City built over 20 years ago. Along with the skate bowls at Pacific Park and Hobert Park, the community identified a need for facilities geared to a range of skaters. As a result, multiple community partnerships helped support the project through fundraising and participation. Among the supporters, the Westpark Skatepark Expansion Steering Team (W.E.S.T.) raised $10,000 for the project design and construction and assisted with public outreach.

“The City worked closely with our residents, skate park users, local stakeholders, and Spanish-speaking community members to create the initial design for the skatepark expansion project at Westpark,” said Parks and Recreation Director Nancy O’Connor. “In preparation for this statewide grant, the City started community outreach efforts in May 2019 and early 2020. Through a series of in-person and virtual meetings, we received hundreds of ideas on specific skatepark features, sustainable landscaping, public safety, and beautification.”

In the coming weeks, the City will conduct additional outreach during the request for proposal process to gather public input as it refines the final design for the skatepark expansion project.

This grant is provided by California State Parks as part of Governor Newsom’s “California Outdoors for All” initiative, which will provide $548.3 million in grant funding to more than 100 communities to create new parks and new recreation opportunities in underserved communities across California.

For more information about City parks and facilities, visit www.cityofventura.ca.gov/Parks.