Each government program appears to be mandated that it be identified by an acronym. In 2008 the country initiated TARP, the troubled asset relief program. Subsequently, between 2008 and 2012 the federal government instituted the quantitative easing  QE1, QE2 and QE3 programs. I suggest that the recently enacted financial legislation be called SOAP. First, because we are reminded, as a personal exercise, to frequently wash our hands. Second, because it might be a more suitably appropriate acronym as a Save Our Ass Program.

By calling the coronavirus the China virus Trump is being a racist. If it started in Germany he would not have called it the German (or the French) virus. Trump blames the Chinese for his slow reaction because they didn’t tell him. This is the same country that he always says lies so he can’t believe anything they say so if they told him he would have just said it was a lie and that they are just trying to sell us a bunch of stuff we don’t need like ventilators.

A 30-year-old videographer in Syracuse, N.Y., said he was still shaken from a trip to the grocery store last week, when the man ahead of him in the checkout line shouted at him, “It’s you people who brought the disease,” and other customers just stared at him, without offering to help. That same day, he said, two couples verbally abused him at Costco.

Fast forward to these past years when our own GOP has mostly by default, or non-action, effectively granted our President and Senate dictatorial powers!

They’ve used their dictatorial power to give tax dollars to the superrich, deny Medi-Cal to uninsured people in the GOP controlled states, and, now to give one or more trillions to corporations, where many CEO’s earn millions each year in salaries and perks.

The only way to change our US History is to vote, vote, vote out of office this dictatorial President and Senate. It’s beyond my comprehension how millions of ordinary people blindly follow leaders who repeatedly pass legislation that enriches corporations and the 2-3% wealthy.

I really liked your editorial in the Breeze re: Scientology. I liked your analogy about a “wait and see” when a new neighbor moves in. Perfect response! 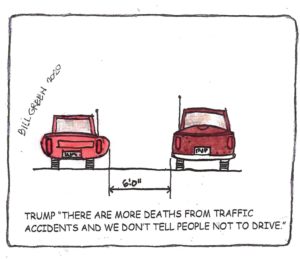 Never approach a bull from the front, a horse from the rear or a fool from any direction.
~ Ken Alstad