When I moved to Ventura five years ago, I played tourist and visited the local landmarks.  I was enchanted by the beauty and serenity of the Olivas Adobe. So I signed up for the training to lead tours and discovered the parallels between the owner of Rancho San Miguel and the State of California. It is a miracle that the Adobe has survived.  I also have a lot of fun and made many friends.

Unfortunately, many of our long time volunteers are no longer able to lead tours.  We really need more people to become docents.  The training is three hour long orientation meeting, reading a book about the adobe and Olivas family, and finally, shadowing a current docent.

We have a meeting once a month.  Our tours are on Saturdays and Sundays, and each tour guide signs up to lead tours one day a month.  If you love history, love to tell stories, and think it might be fun to dress in a costume, we have a fun place for you!  The Olivas Adobe is truly a treasure for Ventura that needs to be shared with the community. For more information, or to volunteer, call Joanne Abing at 805- 644-4586.

Dear Mr. Brown,
In your recent op-ed, you claim that same-sex marriage should be ok, because it does not harm anyone.
The very next paragraph you basically espouse pro-choice, and abortion. You wonder why Christians would be against this. Maybe it’s because we believe it does harm to someone! The pro life Catholic teachings are much more consistent than your pick and choose style. Pro life from conception to death. Try to pick it apart, you can’t,
God bless, sir.
Paul Caron

Paul:
Won’t even try to pick apart. Thanks for your thoughts.

Why are we allowing the government and religious entities to be involved in our personal healthcare decisions?

In my opinion, those who call themselves, “Pro-Life” are merely “Pro-Birth”. Their policies often do not support care for these babies.  For example, many women without insurance cannot receive prenatal care.  Food supplement programs are under constant attack, as are childcare and early educational programs.

Bottom line, government and religious entities should not be involved in interfering or controlling women’s bodies or in their healthcare decisions.

Brother John, age 81,lives in the family home in Wilkes-Barre Pa. got word that he was having dizzy spells and admissions to the hospital emergency room.

I flew to Pa to see if I could help . John was okay but the doctor said he should not drive.

On Primary day 5/2119 I drove him the poll so he could vote. At his polling place they had coffee and cookies for the voter. Wow.

The young people outside the poll were eager to talk politics/voting. They told me they were disappointed with elected officials on all levels

There are 200,000 registered voters in John’s County (Luzerne) and generally 20% voted in the primary.

They told me they wanted accountability over the elected officials. It was discussed that the federal debt last year was $800 billion. (More spent than raised in taxes).

On idea brought up was to make Congress (Senators and Representatives) balance the budget by only spending the amount raised in taxes. If that was not done then the pay of the Senators and Representatives would be cut by 10% for the next year. One young girl said that if they did it twice in a row they should be barred from running for office in the next term If you have any thoughts about these ideas send me a note George Benz 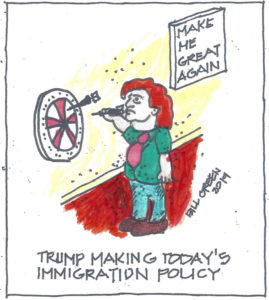 “If people don’t want us outside, then where should we go?”
~ Andy Grabarkiewicz Venice homeless resident