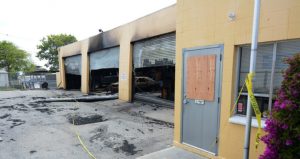 On May 23, a two-alarm fire consumed a Ventura radiator business located on Thompson.

Ventura Radiator and Auto Air Conditioning was badly damaged in the fire. The fire damaged a large portion the building garage which caused the roof to collapse and the exterior walls to buckle.

The estimated damage to the structure was approximately $500,000 and personal losses were estimated to be $100,000. The cause of the fire remains under investigation.