Now the USA isn’t the only country being led by a comedian. Ukrainians overwhelmingly voted to make a comedian their next president — ushering in a new era of politics in the struggling country.

Volodymyr Zelensky, a famous comedian who portrayed Ukraine’s head of state for years on a popular comedy show, defeated the incumbent president, Petro Poroshenko, who had been in power since 2014.

Zelensky won a staggering 73 percent of the vote. Poroshenko conceded the race not long after polls closed.

I have been going to VCMC since I retired. I get a yearly check-up and report that I am very healthy, physically and mentally.  My one complaint is when I go to get blood drawn the waiting room’s TV has Fox News on!!!!!

Considering that VCMC is a ‘teaching hospital’ and for them to ‘advertise’ falsehood and lies on the TV viewing is abhorrent.

I would assume that VCMC is a non-partisan organization. Maybe they should be showing a nature show or something of educational value. I wonder who in VCMC would be the contact person that would take my request seriously?

If you keep watching Fox News you may not stay healthy.

I am writing this and sharing it as widely as I can. My hope is to inform as many people about the false claims and faulty planning by the City of Ventura Water Dept staff.

The first claim: there is a water shortage

There is not a water shortage. The city has multiple sources that are and can meet the city demand. The fact is the City Water Dept staff have and are acting in manners that reduces the water availability to our users in a manner that allows them to falsely claim a shortage.

Currently there is a surface flow in the Ventura River, going by within 15 feet of the abandoned surface diversion facility. That is nearly 20 times the current amount of water the city is using daily. This river water is the cheapest and highest quality water available to our users. If it was being produced into the system the use of the much lower quality deep well water that is in distress as a supply could be reduced and everyone would be better off.

The second claim: city is caught up in and forced by legal restraints and settlements

The city allowing and conceding to a legal settlement on the estuary was a total theft of city water resources. The fact is there would not be an estuary if the city didn’t put its’ tertiary treated effluent in there to begin with. Based on the latest costs estimates the City could have easily permitted and built an ocean outfall instead of wasting what will be hundreds of millions of dollars on their WaterPure experiment that has no chance of ever being permitted for potable use.

The amount of water already spent on this boon-doggle could have built multiple reverse osmosis facilities to make currently available groundwater available and of higher quality of any source the city currently is using.

The full story on that issue is being completely hidden from the current population of the city even though those in authority at the City Council and Water Commission are in full knowledge of such legal standing.

As I ride my bike around the City of Ventura, it is a bone-jarring, near rim-busting experience.  When I drive my car around the City of Ventura, it is a near axle-breaking and tire-popping experience.  Trying to dodge all the potholes and ruts may someday get me pulled over by the Ventura Police Department who will surely think I am drunk due to all the weaving around, but after I explain my actions to the officer he or she will let me go because they have to drive on our crumbling and decaying streets, too.

The bottom line is that our streets are an embarrassment.  They look like they belong in a third-world country and not in an ocean side town.  I am sure that their total disrepair has caused more than a few accidents and plenty of undercarriage damage.  So at least the body and repair shops are benefiting from the city’s neglect.

As I go around, I also see no work being done on the streets outside of an occasional pot-hole filling crew which is like putting a band aid on gunshot wound.

When I fill up my car with overpriced gasoline made more expensive by crushing taxes, I wonder where all that tax money is going?  Whose pockets is it lining? Have payoffs have been made?   I have no answers.

All I know now is that it is nt going towards street repairs and everyone who lives here and pays their taxes need to be up in arms about this dereliction of duty by the city politicians and bureaucrats who dole out our tax money.

It’s time to resurrect the GOP mantra; “Let’s make him a one-term president”! However, the “him” has changed! Can the Democrats unite to defeat the current president who only represents and has the support of about 40% of Americans?

There are so many qualified Democratic candidates. In my opinion, Joe Biden is the best person to defeat “Him” and make “Him” a one term president. And, once “He” is out of office, the Justice Departments (federal and state) can finally do their job and make “Him”

accountable for obstruction of justice as president and tax/business irregularities.

Let’s support Biden and whichever strong Vice President is selected. I believe the Dems can finally “drain the swamp”, which has doubled under this administration. 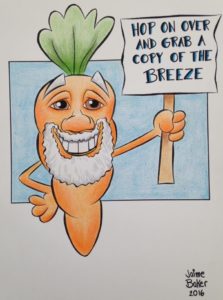 No matter how old you get, if you keep the desire to be creative, you’re keeping the man child alive.
~ John Cassavetes