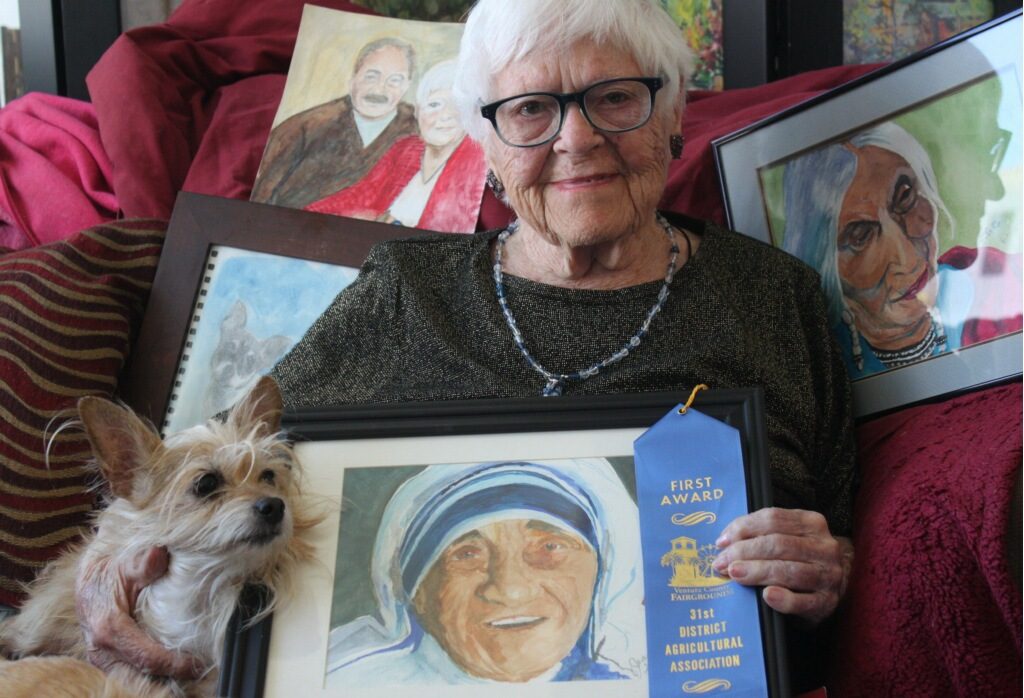 St. Germain with a few of her award winning paintings and  buddy Goldie .

For most of her 96 years, St. Germain was a professional violinist/viola player.  About 10 years ago, arthritis and bursitis were affecting her arms and she had to stop being a musician.  She had played everything from classical to the Boston Pops to accompanying some famous pop singers (Tina Turner, Sammy Davis Jr., Peggy Lee,) so this was a crushing change in her life.  She felt she was not doing what she was meant to do, not being creative or artistic.

She tried other instruments, continued to teach and perform through her students.  But she was looking for something personal, her own creativity.  Her daughter Michelle Nosco, an artist herself, kept giving her art kits and supplies.  One day St. Germain was sitting at home looking at a plant, and said to herself, “I could draw that!”  She had a pencil and a sketchbook, and started using them.  She still has that book, and the viewer can see that even at the beginning she had a feel for shapes, and an uncanny ability to capture the spirit of a person or animal or even a still life.

Since her son and daughter live in California, she had moved to Santa Clarita after living in Boston, Maine, Canada, New York, Detroit, among other locales.  In Santa Clarita she discovered Lorelle Mille, a famous chalk artist and started to take lessons.  An amusing sidelight, while living at Bouquet Canyon Villas she wrote a column for the Senior Center newsletter named “Pet Talk;” whenever a new person moved in, she would interview them about their pets!

A purist, she stayed with pencil drawings for a while because she didn’t want to try color unless it would be “perfect.”  She still has her first attempt at a color picture, reddish flowers with some nice shading.  After that, she was ready to take the next step.

A year ago she came to Ventura, and lives with her daughter and their two dogs, Jack and Goldie, in the Working Artists’ Village(WAV).  She began watercolor classes at Ventura Adult Education with Judy Klement.  At a reception at the Ojai Museum, she discovered the work of Ojai-based Alice Matzin, who does paintings of older people; she was motivated by Matzkin’s art to go into watercolors more deeply.  She and Matzkin met later, at an exhibit at the Government Center (St. Germain had an Honorable Mention) and she was able to explain how she was inspired.  That was a memorable meeting for both.

This influence shows in her vivid portrait of Mother Teresa, for which she won a First Prize with a cash award at the Ventura County Fair.  St. Germain is happy with her accomplishments and only wishes she had discovered painting earlier in her life because “there are so many more things to paint.”