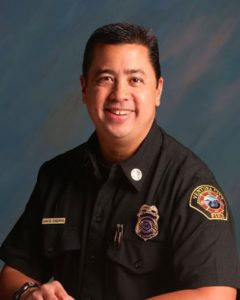 What are the most important priorities for the Ventura City Fire Department right now?

As a full-service city that also functions as the county seat, Ventura faces many challenges when it comes to public safety.  The City contends with miles of coastline, railroads, highways, two rivers, the Government Center, the County Jail, the County Fairgrounds, wildland (brush) fire hillsides, tsunami threat, earthquake faults, and more.  Despite the many unprecedented challenges, the Ventura Fire Department continues to remain trained, prepared, and equipped to serve you quickly and efficiently in times of crisis or disaster.

Maintaining fire, police and paramedic emergency response is vital to protecting the residents of Ventura. One of our highest priorities is to keep our response times as short as possible.  Nearly 85% of all calls to the Ventura City Fire Department’s communications center require emergency medical attention.   Keeping all six of the City’s fire stations open is important to maintaining quick response times and utilizing every resource available to save lives and mitigate emergencies.  One of our local fire stations currently relies on temporary funding to remain open.

The City has placed Measure O on the November ballot for voter consideration to make local funding available for vital city services, including keeping all existing fire stations open.

In 1974, when the department responded to 1,975 calls annually, the daily staffing was 19 firefighters.  In 2016, the number of permanently funded firefighter positions remains at 19.  The additional 3 daily positions we have today are only temporarily funded, and that is the greatest challenge we face when trying to maintain rapid, efficient emergency response.  Maintaining today’s response times means keeping all of our current fire stations open and operational.

Another priority is ensuring firefighting equipment and training is up to date.  The advancement of technology is, at best, very difficult to keep up with.  Progressive elements such as new air bags in vehicles and different types of home construction present new challenges to emergency responders.  Firefighters must learn and train on the techniques of victim extrication from newer cars and the dangers the airbags pose to rescuers during emergency operations.  They must also become experts at understanding newer building construction under fire conditions, and when and how the structure may fail or collapse.  These are two examples of the many types of incidents our crews face every year.