•  On Saturday, Sunday and Monday (right before our issue is printed and distributed on Wednesday) Alfred J. Lewis, the Breeze’s Graphic Artist from Studio Nothing, lays out the paper and, as always, makes it look wonderful.

On the Friday, before our July 20 issue, we had a scare. Alfred called me and asked me if I could take him to Community Memorial Hospital (CMH) because he thought it was possible he was having a heart attack. I told him I’d be over right after I finished my dinner (kidding, of course). I immediately took him to the ER and it took them two days to determine that he had a hiatal hernia and not a heart attack. 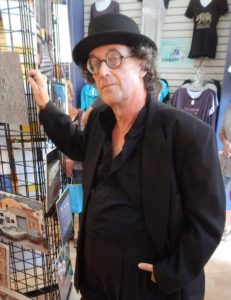 Alfred was operated on and spent several more days in the hospital. So, you ask, what is amazing about this? Well, Alfred had his friend Sue bring his design computer to CMH. The hospital staff kindly, but reluctantly, set up a table on his bed and he designed the paper while lying there recovering, but in pain he was on significant levels of medication (with his great sense of humor, Alfred said that it reminded him of when he was in his early twenties).

On Tuesday, about 6 hours later than usual, Alfred sent the issue to our printer, and on Wednesday we delivered the Breeze to our nearly 600 distribution locations. Alfred, is my hero.

•  The City Council is looking at new regulations for the control of massage parlors and short term rentals in Ventura (STVR). Recommendations for both of these uses will be presented by staff to the Council in September at which time they can take further action or request further information. There is a freeze on massage parlors in place that is being analyzed further.

The Council instructed staff as follows for the STVR:

1) Return to the City Council in September 2016 with a recommended process for reviewing and considering changes to the City’s current STVR ordinance, policies, and practices to include a community and stakeholder outreach/ engagement process.

2) Return to the City Council in September 2016 with a draft ordinance placing a moratorium on the issuance of any new STVR permits during the review period. This would allow those that currently hold a valid STVR permit to continue to operate under the existing ordinance, but would preclude the issue of any new permits.

The Council wants to know what the effects are of short-term vacation rentals on the community. Many Pierpont residents have complained about STVR. They want to know about related calls for police and fire services, the number of rentals and how that is changing.

Councilmember Mike Tracy requested a greater analysis of the STVR situation before he could decide whether a moratorium should be put in place.

City staff will also look into how many rentals in Ventura don’t have City required permits for short term rentals. I’m not sure how they will accomplish that.

What is interesting is that the California Coastal Commission generally interprets short-term rentals to be an acceptable use in residential zones The commission sees them as a way of offering affordable options for families to have coastal access and use our beaches.

For massage parlors, to be considered a house of ill-repute, and not a legitimate massage business, it would need to be proven that “There is substantial evidence of prostitution” . I wonder what that would be?

In both of these situations, Councilmembers expressed concerns about how massage parlors and short term rental ordinances would be regulated by the Ventura Police Department and code enforcement. Both of these agencies are very understaffed and are challenged with managing their current caseloads.

Tracy (our ex-chief of police) stated, “If there isn’t a clear enforcement mechanism, we’re wasting our time.”

•  I see ads (mostly for cars) on TV that state “These are real people not actors.” I always thought that actors were real people.

•  Sarah Palin said that she didn’t attend the RNC because Cleveland was too far from Alaska. Was she planning to get there on a dogsled? She had no problem leaving Alaska when she decided she could make more money on speaking tours than from being Governor.

•  I’m shocked to learn that Brooks Institute’s plans to expand into downtown Ventura have been put on temporary hold by Brooks and all construction has been stopped. Some major construction has already started in several locations, which has cost thousands of dollars.

They have suspended the work in order to allow more time to review and assess the buildings and projects, whatever that means. Construction has been ahead of schedule, so, assuming they decide to continue they will still be on schedule. Brooks has a lease until December at their existing location on their Ventura Ave.

Green Planet Inc., a privately owned company in Waltham, Massachusetts, assumed ownership of Brooks in spring of 2015. Green Planet Inc. is a mid-sized, relatively new organization in the business consulting services industry. It opened its doors in 2011 and now has an estimated $7.9 million in yearly revenue and 200 employees.

To occupy the site behind City Hall which is owned by the city, the occupants (several non-profits) had to pick up and leave. The City Council approved the five-year lease with Brooks for two floors in the building.

This hold by Brooks might not be as it seems. The contractor’s doing the remodeling projects were not being paid and shut down the projects. Brook’s might be in serious financial trouble. I certainly hope not if Brook’s abandons the move (almost impossible to imagine), there will be some very angry and upset people including downtown merchants who looked forward to additional customers eating and purchasing in downtown. And lots of lawsuits.