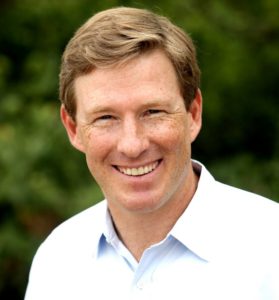 Ventura City Mayor Erik Naserenko was elected to the Ventura City Council in November 2013. He was appointed Mayor by the council in December 2015, and had served as Deputy Mayor for the first two years of his term.

Nasarenko, as well as serving as Mayor is a Ventura County Deputy District Attorney. He specializes in prosecuting child molestation and rape cases. Prior to his service as deputy prosecutor he worked in public education as chief deputy to the Los Angeles school board president, and as a communications director to the Los Angeles and Pasadena school districts.

Recently Breeze Staff Writer Richard Lieberman and Publisher Sheldon Brown met with Mayor Nasarenko for a working lunch to discuss some of the current issues facing Ventura voters and to discuss his first year as Mayor.

Breeze: When you were elected you called for a tax increase(will be on November ballot), are you still calling for an increase?

“I am committed to increasing the sales tax by half a cent, it would provide long term revenue for generations to come, and will help address shortcomings in public safety funding, in deteriorating infrastructure, and for cleaner beaches and rivers. My commitment has been to create a sustainable, long term funding source and I am convinced that that a modest half a penny increase will garner about 11 million dollars in our budget annually.”

Breeze: The council for years has denied allowing medical marijuana clinics to operate within city limits, and it appears there will be a statewide ballot initiative this year to legalize recreational marijuana. Where do you stand on that?

“As you know we do have a statewide initiative that would lead to legalize marijuana, I have been opposed to it. I believe cities should retain land use controls over controversial store fronts and dispensaries, and while it may garner more revenue for the city of Ventura the attendant problems with crime and with what is predominant in cash businesses, and the patchwork of regulations is still problematic.  As part of new revenue for the city of Ventura I believe those who have illnesses should be able to utilize the compassionate care act to either grow their own, to utilize a caretaker to bring it to them or to go to nearby dispensaries in the San Fernando Valley.”

Breeze: Now that you are mayor, the immediate past mayor Cheryl Heitmann was known for attending virtually every, public event, store opening, beach cleanup and other public events how do you stand on that?

“My hours are more limited. I attend events during my lunch hour, weekends, or after 5:00 pm weekdays. I have to maintain my commitment to the state and the county to serve as a deputy district attorney, while at the same time attending events, all the meetings and just reaching out to take the pulse of the community.”

Breeze: Since you have been mayor what are the challenges facing you?

“The demands on my time can be very difficult. There are far more events that I am invited to attend than I can actually make. There are far more meetings people would like to have with me that by virtue of my time constraints I have to delegate to someone else. So that is an ongoing juggling act. I am very pleased with the progress made in addressing homelessness, just this last Monday to have a seven-zero unanimous vote to move forward with a potential shelter that would have wrap-around services in an industrial area of our city is a significant accomplishment. I have also learned as mayor there is a time to lead, then there is a time to let your colleagues exercise leadership, and I saw from the dais recently how articulate and common sense oriented the council was on this matter.”