The city of Ventura and its residents have been nationally recognized for pledging to conserve water and cut pollution. 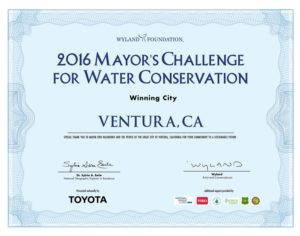 Ventura placed first in the fifth annual Wyland National Mayor’s Challenge for Water Conservation, which ran from April 1-30. The contest asked residents to pledge online to conserve water, and Ventura had the highest percentage of pledges for cities with populations between 100,000 and 299,999. Athens-Clarke County, Georgia, placed second in Ventura’s population category.

Wyland spokesman Steve Creech presented Ventura Mayor Eric Nasarenko with the first-place plaque during a noontime ceremony on the steps of Ventura City Hall on Thursday May 19.

“I don’t usually like to brag, but ‘Way to go, Ventura!” Nasarenko told an enthusiastic audience that included City Councilman Jim Monahan, Fire Chief David Endaya and many city employees.

Nasarenko congratulated the Ventura residents who pledged at www.mywaterpledge.com, saying their efforts will save over 26 million gallons of water. Venturans also pledged to reduce their use of single-use plastic bottles by 48,931, eliminate 1,172 pounds of hazardous waste from entering watersheds, and cut the amount of waste sent to landfills by 562,475 pounds.

Overall, 4,100 cities across the U.S. participated, with residents making pledges to reduce their water use at home, around the yard, and in their lives. Residents nationwide pledged to reduce their cumulative water consumption by over 1.9 billion gallons – an amount totaling the equivalent of 2,877 Olympic-sized pools!

The Wyland Foundation, a nonprofit founded by renowned marine life artist Wyland, has helped children and families around the nation to rediscover the importance of healthy oceans and waterways through public art programs, classroom science education and live events. The Mayor’s Challenge also is sponsored by Toyota, with support from the U.S. Environmental Protection Agency, the National League of Cities, The Toro Company, Earth