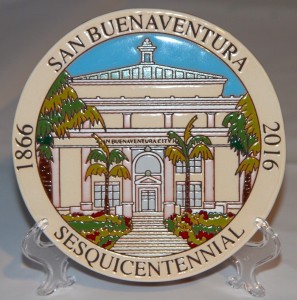 San Buenaventura was founded in 1782 by Father Junipero Serra, the ninth of the California missions. He named it after the Italian St. Bonaventure, hence the nickname that Ventura is the “city of good fortune.” The City of San Buenaventura was incorporated in 1866. The minutes of the first City Council meetings were recorded in Spanish, which was still the pre-dominant language of its time. Ventura became the County seat when Santa Barbara and Ventura Counties split in 1873. That same year, a courthouse and wharf were built, a bank was opened and the first public library was created. Ventura became known as the Poinsettia City because of the number of beautiful red-blossoming plants throughout the community.

The city’s 150th anniversary will be on April 2, 2016. There are many projects and events planned to celebrate this momentous occasion. The largest project will be a “”community-sponsored 42’ ceramic tile mural in front of Mission San Buenaventura, showcasing the history of the city. It will be designed and created by renowned artist Michael O’Kelly, of the California Pottery and Tile Works, who works out of his Ventura studio-home.

California Pottery and Tile Works  has done many custom ceramic projects that you may be familiar with, including the Santa Barbara Zoo, the Music Academy of the West, the Biltmore Hotel, La Cumbre Plaza, Paseo Nuevo, Watermark Restaurant, Los Angeles Union Station and Disneyland. (for more information on the anniversary see www.celebrateventura.org )

Mr. O’Kelly has designed several special-edition commemorative ceramic plaques that are available from now until April. If you would like to purchase one for the tax-deductible donation of $125, please contact him at michaelkellybooks082@gmail.com.