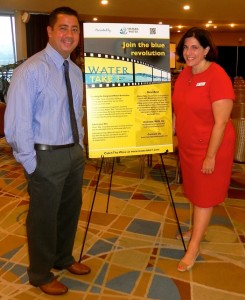 On Oct.14  Ventura Water celebrated the launch of the 4th installment of its annual Water Take 1 Online Short Film Contest with a kick-off reception emphasizing collaborative community efforts in water conservation and sustainability. The reception was held at the Crowne Plaza Ventura Beach and the contest, which highlights our relationship with water, through the powerful medium of film, draws attention to the growing challenges facing our water supply locally and internationally.

“This year Water: Take 1 is putting a focus on the importance of collaboration in achieving goals and solving problems in ways that are truly sustainable.” Said Ventura Mayor Cheryl Heitmann.  “The drought has been a great reminder to Californians that we must work together to resolve existing water shortages not only for today but for future generations.  This is accomplished only through local   government agencies partnering up, businesses and government cooperating with each other and communities working together to achieve integrated and sustainable outcomes.”

Guests at the Kick-Off Celebration were presented with an overview of several of the City’s most popular initiatives including the Water Wise Free Gardening Classes and Incentive Program, The Direct Potable Reuse Demonstration Facility and some fun and entertaining programs such as the ‘Hey Ventura, What’s Your Shower Song” Campaign.

Short film submissions, up to 5 minutes in length, are being accepted via direct upload at the contest site – www.watertake1.com – and must address the topic of water in any genre including drama, documentary, comedy, animation, sci-fi or experimental. Films are posted online and a jury of entertainment and environmental experts vote to award prizes in categories such as the Grand Jury Prize, Ventura Vision Award and Best Student Short Film.

The public is also encouraged to take part by voting online for their favorite film and awarding the Audience Choice Award.  The deadline for film submissions is December 15, 2015 with voting for the Audience Choice Award open through January 14th.  The winning films we be presented at an Awards Celebration in March of 2016 at the Downtown Ventura 10 Movie Theater.