It happened. An epic swim around Santa Cruz Island took place back in late September. “As far as we know, it’s the first time it’s ever been done,” says team captain Claudia Rose, 53, of San Diego.

“Most of us swam six legs which took about an hour each average,” says Michelle McConica, 61, of Ventura.

What would inspire women with such diverse backgrounds to undertake a feat like this? An ongoing quest to meet bust obstacles, reach goals and just like mountaineers who say they climb because the mountain is there – for these women, the ocean is also right there.

McConica, who grew up in a copper mining zone in Arizona, only started swimming in college, for a physical education class. Most of her teammates got into swimming in late adulthood.

Rose grew up in New England and moved to California 30 years ago, competes in triathlons and likes to analyze maps and charts, being the systems engineer that she is. “I taught open water swimming and kept hearing about Santa Cruz so that piqued my interest,” she says.

“In fact, you can see the island from Michelle’s house,” she says, explaining the appeal of their monumental undertaking. There have been various successful attempts in swimming from the mainland to the various islands and back, but never around Santa Cruz Island.

Louise Darlington, 57, from Elizabethtown, Pennsylvania, remembers meeting Maryland native Diana Corbin at a lake swim. “I was drawn to Diana’s Channel Island tattoo so we started talking,” says the librarian who only started swimming at the age of 40, to distress from work.

The two became fast friends and connected on Facebook where there’s a fairly active open water swim community. In March of 2016, Corbin invited her to join the team. Jeannie Zappe of Mechanicsburg, Pennsylvania, completed the all-women team.

“We had a support dive boat called “The Peace” owned by fellow Venturan Eric Bowman,” says McConica. “His crew graciously kept us fed for 24/7.”

The team also had one to two escort kayakers with then all the time, for support. Says Rose, “You never want to do any of this alone. You need a support crew and observers.”

What thoughts were swimming around their minds during those grueling 40 hours? “We actually weren’t anxious about the sharks. We were more frightened about LA freeways,” says McConica with a chuckle.

The team gets asked the obvious questions all the time. Given that no wetsuits were allowed for sanctioned events, was the water cold? “You get used to it clad only in your swim cap, goggles and bathing suit.” Were there sharks? “No.” Was it tough to stay awake? “Yes, but you try to sleep whenever it’s not your turn to swim.” Was it hard to figure out where you were exactly in the ocean? “Sometimes, because unlike pools, there are no lanes.”

The fog can be a challenge. “You just try to stay as close to the kayak and dive boat as much as possible,” says Darlington.

They may not have trained together, given their geographic challenges. Four are from the East Coast while two are in SoCal. However, all of them  trained individually in adverse, nasty conditions to prepare for strong ocean currents and other challenges like the presence of sea lions, dolphins and an illegal fishing boat.

A few days before the epic swim, the team practiced some night swims in San Diego.

Rose also broke her elbow in April and Corbin had wrist surgery around the same time. Teammate Carol-Lynn Swol’s mom also passed away the day before their swim.

Open water swimming has its own special appeal. McConica explains, “We have a great deal of respect for the ocean. Swimming at night was just sheer magic.”

The ladies’ epic swim undertaking has been recorded and can be found on: https://santabarbarachannelswim.org. 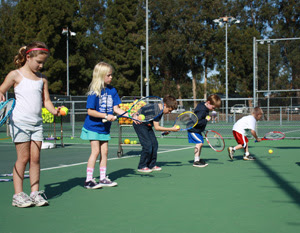 On Saturday, Feb. 3, join the Parks, Recreation & Community Partnerships Department for a day on the court with tennis clinics for kids and adults at the Camino Real Park Tennis Center. Children ages 4-16 are invited to learn from 1-2 pm, and people who are 17+ from 2-3 pm. This clinic is an excellent opportunity to try out this great sport or to dust off your skills before signing up for Parks and Recreation classes! For more information call 642-7652. The tennis courts are at Camino Real Park, 4199 Dean Dr.

It’s all about the Club’s ethic of showing people the forests, open spaces, mountains and rivers in a safe and comfortable manner, and you don’t have to be a member.

Now in its 9th year, the program runs from Feb. 7 to March 28 with conditioning hikes, car camp and backpacks in prime locations in Santa Barbara and Ventura counties.

The course is geared to a wide variety of experiences, ranging from novice to knowledgeable, out-of-shape to out-of- sight. It’s for everybody, from teens to seniors, singles, couples and family members.

Classes are Wednesday nights at the Poinsettia Pavilion, 3451 Foothill Rd. Outings are during weekends.

Early bird prices are available until Jan. 24 and the funds are used to cover expenses. Last year some extra funds were donated to the nine Search and Rescue teams in Santa Barbara and Ventura counties.
All the detail you need or to sign up is at:
http://www.lospadreswbc.org
[email protected]
www.Facebook.com/lospadresWBC
805 524-7170

McGrath State Beach temporarily closed on January 5, until further notice due to the recent increased flooding caused by the Santa Clara River Estuary. The beach will close for the security, safeguarding, and preservation of resources.

The flooding is caused when the waters backs up behind the naturally occurring sand bar blocking the mouth of the estuary until the estuary breaches with regular rainfall. Seasonally, McGrath State Beach enjoys cool summers and mild, wet winters.

Ventura Sector Superintendent, Tyson Butzke, said, “The park will remain closed until the floodwaters recede and cleanup and repairs to the entry road and campsites have been made.”

“It’s a classic irony,” said Tyson he’s used to the strange looks he gets when he tells people the worst flooding typically comes during the driest years. That happens because a sandbar builds up between the ocean and the mouth of the Santa Clara River, trapping water in the estuary.

The city of Ventura has a permit to discharge treated wastewater into the estuary and has done so for decades. As the water rises, it spills into the campground.

Most years, winter rain forces enough water down the river to break through the sandy berm, letting the water drain into the ocean. The campground then reopens in the spring.

But with little rainfall during dry years(up until a few weeks ago), the berm and flooding stuck around longer. Before opening this past Labor Day weekend, McGrath was closed for nearly three years.

The berm had breached that winter, and staff and volunteer groups repaired flood damage and cleared away dead trees and brush. In all, Butzke said they were able to open 47 of the 170 campsites.

According to Danette Delgado -Marketing and Public Relations Specialist for the Channel Coast District, California State Parks “Our mission is to provide for the health, inspiration and education of the people of California by helping to preserve the state’s extraordinary biological diversity, protecting its most valued natural and cultural resources, and creating opportunities for high-quality outdoor recreation. With over 340 miles of coastline, 970 miles of lake and river frontage, 15,000 campsites and 4,500 miles of trails, the State Park System provides wonderful recreational, educational, and inspirational opportunities for over 67 million visitors a year.”

“McGrath State Beach is one of the best bird-watching areas in California, with the lush riverbanks of the Santa Clara River and sand dunes along the shore. This is why we always try to re-open McGrath, for the pleasure it brings to those camping there.”

Join the riders at San Buenaventura State Beach. Photo by Murray Robertson from 2016

Theresa Brees has participated in the CCC multiple times with her husband and sister as “Team Sluggy”. She’s riding again this year, in honor of her 14 year-old daughter Mia, who was diagnosed with arthritis when she was 6, and has been a honoree at the Santa Cruz stop of the tour.

The Arthritis Foundation’s California Coast Classic Bike Tour is a scenic bike ride that takes place over 8 days and is estimated to cover an additional 45 miles over 2016 and 2700’ of elevation over the course of the tour. The Tour starts in San Francisco and ends in Pacific Palisades with a stop in Ventura.

The California Coast Classic Bike Tour will be coming through Ventura and you’re invited to meet the riders, volunteers and staff. Join the riders at San Buenaventura State Beach Day 7, Friday, Sept. 15.

Where they will camp out. Festivities include CCC Social Hour (4-6 p.m.), dinner (6:30 p.m.) where there will be great opportunities to interview riders and tour staff.

The next day, Saturday, Sept. 16, the last day of the tour cyclist will have breakfast (6:30-8:30 am) and then ride 55 miles and climb 1,800 feet of rolling hills along the gorgeous coast into Malibu, and cross the finish line at 2 p.m. as a group in Pacific Palisades to fanfare and an emotional welcome.

Mark your calendars. The next Surfrider Foundation, Ventura County Chapter cleanup is August 26th, 9:00 – 11:00 a.m. Meet in Ventura on the beach promenade at the end of California Street.

They are breaking their previous year records each month. Using 124 volunteers, last month alone, the total collection was 396 pounds of trash, including 3,500 cigarette butts and two Star Wars characters.

So for tons of fun, join in for two + hours of cleaning up.

This group is one of the most successful out of eighty Surfrider Foundation chapters in America. It’s one of the best recreational opportunities in Ventura County. Bring your friends and family. Be a part of this worthwhile cause.

A volunteer,Ryan Power exclaimed, “Heads up: September 16, 2017 is the record breaking Coastal Cleanup day, the biggest volunteer event in the world!”

This vibrant chapter of volunteers, compromising of ocean enthusiasts interested in all aspects of beach management and ocean protections is waiting for you. 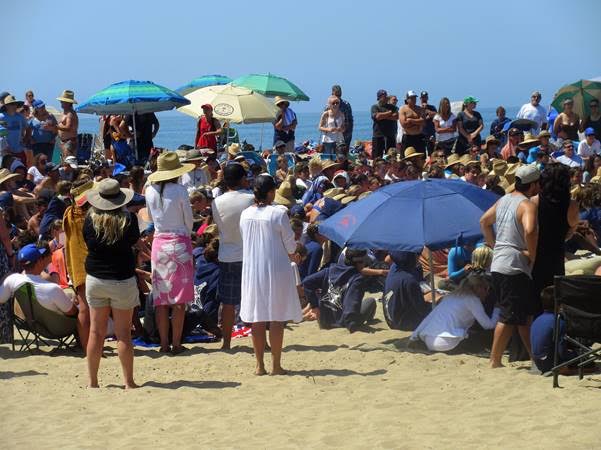 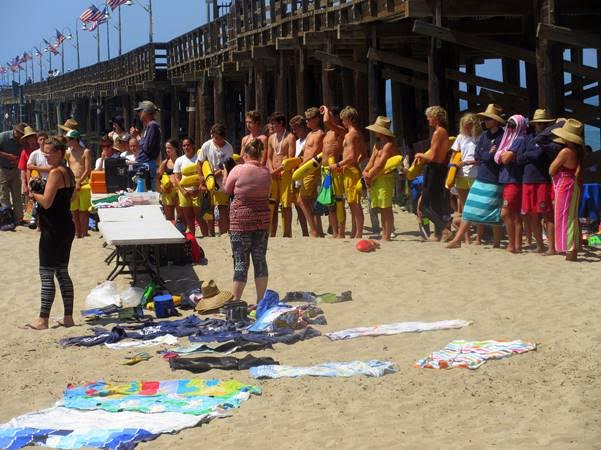 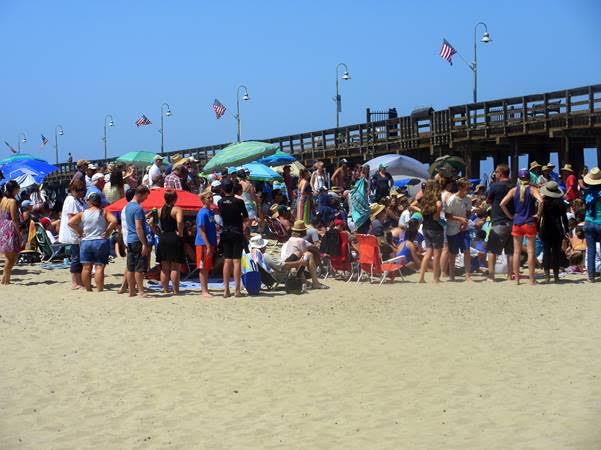 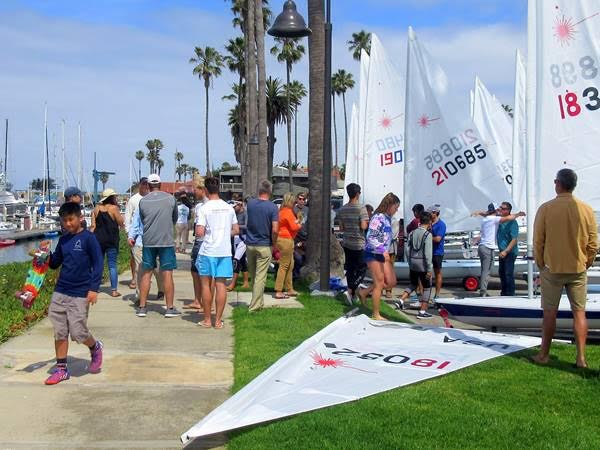 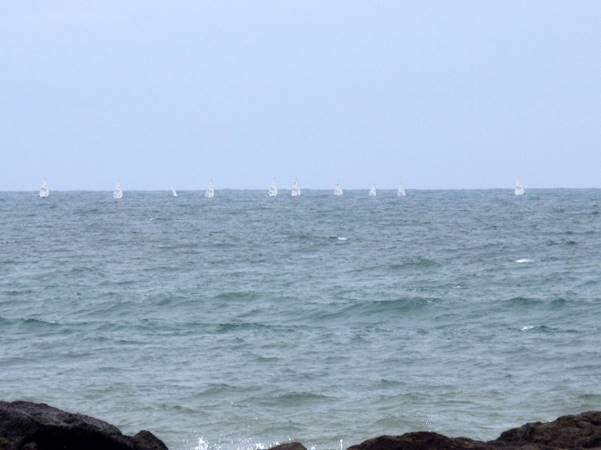 June 17:   8:30 am   Pine Mountain -Tevin Schmitt 661-904-1563 –  If you have never birded Pine Mountain now is time!  To carpool from Ventura meet at 7:15 a.m. at the Casitas Vista exit under the bridge. If you wish, you may meet the group at Pine Mountain Inn at 8:30 a.m  If for some reason weather makes Pine Mountain impassable, we will bird Wheeler Gorge as an alternate.

June 12 :   8:30 am   Emma Woods -Linda Easter  482-7537 – We will begin at the entrance to Emma Wood State Beach, searching the scrub for sparrows and warblers. The estuary is always an exciting place to bird There will be a fair amount of walking, so please dress appropriately in layers and comfortable shoes.

Golf and beautiful scenery all in one.

Olivas Links, Buenaventura Golf Course, and KemperSports announced today that they will host their fourth annual Player Development Month during the month of June. The month-long celebration of golf is built to introduce and re-introduce golfers as they share their passion for the sport. To commemorate the month-long celebration, Olivas Links will offer free 15-minute lessons from staff instructors to all new golfers. In addition to the free lessons, both Olivas Links & Buenaventura Golf Course will offer a complimentary junior green fee with a paid adult green fee any day after 2pm throughout the month of June.

“As avid golfers ourselves, we are passionate about the game of golf,” said general manager Carl-Van Vallier. Player Development Month gives us the opportunity to share our love of the game and hopefully introduce the game to a generation of non-golfers.”