Hide your gold and women the pirates have landed. 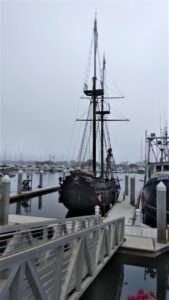 The Devil’s Gauntlet, a replica of a 1767 dispatch carrier dubbed the Brigantine Sultana, is now docked in the Ventura Harbor.

Daniel Blevins Catalano (Pirate Dan), a Fresno native, purchased the ship from Denis Boulankine and Tatiana Boulankina for $1. He has since made extensive (and expensive) improvements to the ship. 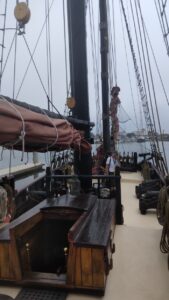 “The boat was in such bad shape that she was ready to be hauled, crushed or sunk. … They ended up releasing the boat to me for $1 just to get rid of the headache basically,” said dynamic Daniel Blevins Catalano.

A Craigslist ad ensnared Catalano’s interest in the ship. After a Florida hurricane destroyed the Queen Anne’s Revenge, his 120-foot gaff rigged schooner, Catalano required a new vessel to marry two longtime passions: pirates and helping veterans and first responders. A veteran himself, Catalano envisioned creating a reality television show about these modern-day heroes as they cope with post-traumatic stress disorders and injuries and with drug and alcohol abuse by masquerading as pirates. 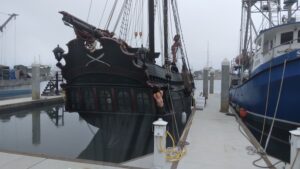 Outside, she resembles an 18th-century pirate ship with custom woodwork, skeleton figureheads and 5,000 feet of rigging. Inside, she swaggers with modern conveniences like LED lights, many flat screen TVs, a full bar, modern kitchen and sleeping for up to 24 if necessary and the latest navigational equipment. 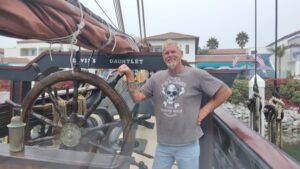 Dan has purchased pirate outfits, swords, black powder guns and even cannons to compliment the ship. The ship’s future in Ventura Harbor is still to be determined. A future article will deal with that.