Let me get this straight Sheldon, if I park somewhere, lock my car, leave some valuables inside, somehow I deserve to have my car broken into? Did you spend some time in the Soviet Union?
Ted Rose

I assume your question regarding “I deserve” is rhetorical. You obviously don’t deserve to have your car broken into. In a perfect world you could even leave valuables in your unlocked car, banks could leave their doors open after they close, packages left on front porches wouldn’t get stolen. But, I’m afraid this very very far from being a perfect world. If it was people wouldn’t have stormed the capitol.

No, I have never spent time in the Soviet Union and not sure what that question even means (by the way the Soviet Union hasn’t existed since 1991). My grandparents were Russian Jews does that count?

The event created a significant amount of damage: 24 residential docs were destroyed, a Harbor Master Patrol boat sank due to the tide and swift moving water. It presented itself as a mild event and turned into a pretty significant event”.

Mr. Wall proclaimed that this was considered a State of Emergency. It was shocking to also learn that Emergency Services found that “the Tsunami Monitor in the Harbor was not working and this will result in that being repaired, whatever that particularly means”.

Needless to say, this brought to mind the events of the Thomas Fire and what did not work during that catastrophic event. 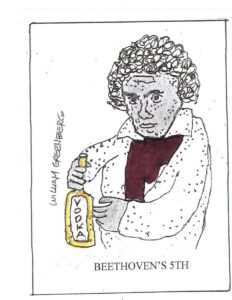 Are you an amateur cartoonist? Send your cartoon to
editor@venturabreeze.com

I’m tired all this nonsense about beauty being only skin deep.
That’s deep enough. What do you want and adorable pancreas?
~ Jean Kerr