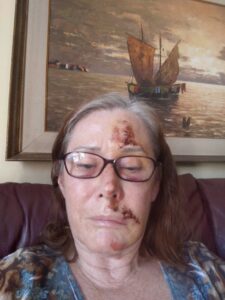 At approximately 8:15 p.m., on August 25, on the pier a homeless man, unprovoked, swung a 24-inch weighted pipe at 62-year-old Julie Howard’s face knocking her out. A tooth was lost at the scene and two other were cracked one having to be extracted. Orbital fracture, concussion and multiple lacerations were also part of the damage. The suspect was arrested at the scene and is being held without bail. This was his fifth known strike.