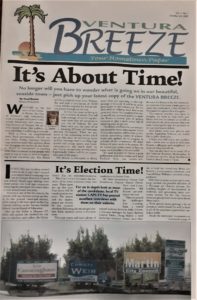 ∙ Wow, another year for the Ventura Breeze. It’s been a tough one, as it has been for most businesses. My thanks to all the special people involved in making the paper happen; our wonderful writers, photographers and distributors for managing to work around the virus and still do a great job, Deena (AKA as Breezy) Gledhill our senior account executive who brings in the money – it’s been a real challenge for her this year. Alfred J. Lewis, of Studio Nothing who lays out the paper and Cindy Summers who does several things including maintaining our website.

A special thank you as well to the many donors (see the back cover) who have contributed funds to keep us going. Many have chosen to not be mentioned. It is so exciting and rewarding to me that readers are willing to help us keep publishing. We received $5 from anonymous with the note, “Sorry this isn’t more! Thanks for your fine coverage of local news.” How special is that?

∙There has been much objection to the Ventura City Council upholding the Planning Commission’s approval of a four-story, mixed-use project at the corner of Front and Laurel Streets, rejecting two appeals that argued the project doesn’t fit the surrounding neighborhood. The proposed building would include 46 condominium units, including five affordable units, and five commercial tenant spaces.

The Downtown Specific Plan was adopted in 2007 and establishes the future development in downtown. This neighborhood is zoned for high-density, mixed-use buildings with retail space, offices and apartments. The proposed project falls under Plan, so the City Council is required to make its decision based on whether the project fits the Plan, which it does.

Community Development Director Peter Gilli explained the project is consistent with both the Downtown Specific Plan and the city’s General Plan, and it is compatible with what is allowed in the neighborhood. The city can’t arbitrarily deny approvals that are allowed by zoning. The applicant did request a larger 4th story under the State’s Density Bonus Law which allows projects with affordable housing to request increased density and other concessions to what is normally allowed. Cities are limited in their ability to deny these State mandated approvals.

If you would like to participate in the future planning of Ventura, you have a chance. In this issue is an article “City seeking people to work on the general plan.” The General Plan guides the City’s vision, goals, policies, and actions for the next 25 years!”

∙ For quick look at your city council candidates, go to www.venturabreeze.com and at top of the page click on Meet the Candidates.

∙ If there is a coronavirus vaccine rushed through prior to the elections, I certainly won’t be taking it. I believe in vaccines and have already had my flu shot, but we need to be sure that the vaccine had gone through many clinical tests and trials before being available. The experts say this might not be until next summer.

∙When Tommy Fisher decided he wanted to build his own private border wall in Texas, he said he wanted to keep out trouble from Mexico. I’m sure the fact that his construction company has landed more than $2 billion in government contracts to build President Trump’s official wall was not a consideration.

‘Anyone who doubts that American democracy could fall if President Trump wins reelection should take it from someone who knows John Dean who says, he believes a budding dictator occupies the White House. “I worked for the last authoritarian president (Richard Nixon) and he was dangerous enough, said Dean. Trump makes Nixon look like a choirboy. If we get four more years of him, Dean said, “then our democracy will be gone.’

Some Republicans fearing that aligning with Trump could hurt their reelection chances are now criticizing him. Even though I agree with them, I don’t respect them doing this to save their careers. Republican Sen. Ben Sasse has criticized President Donald Trump saying a number of unflattering things about the President, including that he’s “flirted with white supremacists” and “kisses dictator’s’ butts. The United States now regularly sells out our allies under his leadership. “

Former White House chief of staff, retired Marine Gen. John Kelly, has told friends that President Donald Trump “is the most flawed person” he’s ever known. “The depths of his dishonesty is just astounding to me. The dishonesty, the transactional nature of every relationship is more pathetic than anything else.”

What kind of a president says things such as this? “Suburban women, will you please like me? I saved your damn neighborhoods, ok?”

Might this be the reason why he wants to get reelected? Without some of the protections afforded him by the presidency, Trump will become vulnerable to multiple investigations looking into possible fraud in his financial business dealings as a private citizen. As an individual and through his companies. He faces lawsuits that could cost him lots of money and even send him to prison.

Michigan’s secretary of state banned the open carry of guns at polling places and other official voting locations on Election Day in the state. Did we ever think that such a statement would need to be made? How frightening to think that “Trump’s army” will be at polling places intimidating voters.

The former Navy SEAL known for his role in the operation that killed Osama bin Laden is speaking out after President Donald Trump encouraged conspiracy theories that the terrorist leader’s death was a hoax. Donald Trump defended spreading a preposterous conspiracy theory about the death of Osama bin Laden saying he had merely been passing along a supporter’s view. “That was an opinion of somebody and that was a retweet. I’ll put it out there” he said, when questioned by NBC’s Savannah Guthrie about his passing along a theory that the killing of bin Laden by Navy SEAL Team 6 had been staged, and that members of the unit had been killed to cover it up.

“I don’t get that. You’re the president,” Guthrie said. “You’re not like someone’s crazy uncle who can just retweet whatever.”

How ironic is this? The antibody cocktail that President Trump received for his COVID-19 infection and touted as a “cure” for the deadly virus was developed using cells derived from aborted fetal tissue, a practice the White House and anti-abortion rights groups oppose.

Donald Trump said his coronavirus infection was a “blessing from God” because it educated him about potential drugs to treat the disease meant to demonstrate his return to work after several days in the hospital. How can this man dare make such a statement? What about the million people worldwide and the 215,000 so far – heading towards 400,000 – Americans that are dead.