This documentary follows the heroic life of Justice Ruth Bader Ginsburg, who started as a young female law student challenging the norms of equality to attend Harvard Law School during a time when men did not want women there, through her career as an equal rights attorney, to her appointment on the U.S. Supreme Court. Ginsburg became known as the Notorious R.B.G., champion for equality and the Great Dissenter against an ever-growing ultra-conservative U.S. Supreme court.

Ruth Bader Ginsburg earned a bachelor’s degree at Cornell University, where she met her husband, Martin Ginsburg. While attending Harvard Law School in her early twenties (being one of only nine women to the 500 men attending), she was caring for her two-year-old daughter and husband who was going through radiation therapy due to cancer. She gathered her husband’s coursework (who was also in law school) from friends so he wouldn’t fall behind and still handled her own coarse load, somehow managing to make the prestigious Harvard Law Review.

Ruth transferred to Columbia Law School and after graduating Columbia, she became a law professor at Rutgers Law School and Columbia Law School. Inspired by her students, she agreed to teach a course in the new subject of “Gender and Law” as well as a course on “Women and the Law”. Ruth also began dealing with sex discrimination cases, becoming a litigator during the emergence of a Woman’s Rights movement in the 1970s, which had the potential of playing a similar societal role to the Black Civil Right’s movement of the 60s. 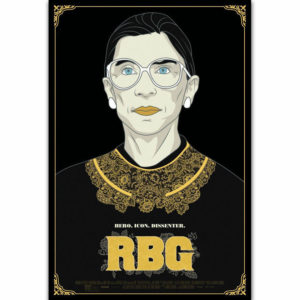 Justice Ginsburg was the second woman to serve on the Supreme Court, at the time along with Sandra Day O’Conner. Ruth guided that court to understand that women cannot be excluded just because they are women and to start with an assumption that both genders must be treated equally. Ginsburg’s style was to build consensus and was more in the middle of how the justices ranked in ideology in 1993 on a scale from liberal to conservative. Though opposites in most every way, Ginsburg and Scalia developed a strong friendship, were regularly seen attending the opera together and attended speaking events together with a friendly jovial presence.

Justice Ginsburg was a pioneering women’s rights advocate that inspired a younger generation to get involved in the court system with her quick wit and great sense of humor. She became an icon in her 80’s being considered by many to be a superhero, with mottoes appearing like “Can’t spell Truth without Ruth” and becoming known as the Notorious R.B.G. She served on the Supreme Court 27 years until her unfortunate passing this last week at the age of 87 after several battles with cancer.