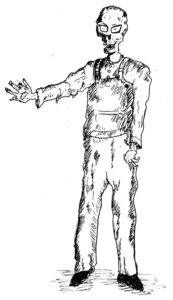 As Fall approaches, inching its way into Ventura, It is natural to turn to stories of the supernatural and ghosts. The Old Spanish Mission of San Buenaventura is the oldest building in town and as such, it has a bevy of ghostly stories that date back to the 19th Century. All of the 21 Missions of California have similar legends.  In the daytime when the sun shines bright it is easy to dismiss their tales as just so much folklore, but, when the cool fog rolls in from the Pacific and the moon is full, such accounts take on a new life and they become believable.

The most persistent story, and one of the oldest is that of the phantom monk, a gray robed Franciscan padre who wander the Mission grounds.  The earliest stories told that seeing the monk was an omen of approaching death!  Seeing the apparition was a sign one should put their affairs in order, go to church because their time on this Earth was limited.  The Ghostly Monk is still being seen today, but the story has changed.  Today the phantom is a proto-saint out to help people in need.  Now, seeing this figure is a good thing as it means your prayers will be answered.  The accounts I have sound like something from the middle ages.  People go to the church with an insoluble problem.  They pray for a solution, as they leave they see the smiling monk and go home to discover people have changed their mines or that money has arrived from an unexpected source. One young man said that a strange monk had heard his confession and given him absolution.  The young Latino man said the monk’s Spanish was “old fashioned” with out of date words, used two hundred years ago! He believed it was a visiting padre from some conservative order from Spain or Andorra.

When he asked, he was told their was no visiting padres at that time.  Who ever it was, it seemed concerned  for the welfare of the parishioners.  The rule is, if you seek answers, you must pray with a pure heart, and it must be a prayer for someone else, not yourself.  The ghost monk has been seen in the older sections of the Holy Cross school (after hours only) and in the courtyard.  The saintly monk isn’t the only ghost to walk here. A woman in white is seen in the last pew. She has long white hair and appears to be an elderly woman. She is dressed in a long white dress and holds a silver rosary. One witness said said as she moved towards the altar rail, she floated, having no feet!   Once she kneels at the altar, she makes the sign of the cross and vanishes away.

A newer story is that of a burned man, charred all over, clothes burned, as he stumbles down to the altar. The description resembles the Char-Man creature seen on Creek Road. Maybe he was a Roman Catholic in life? Why come here rather than Saint Thomas in Ojai? Perhaps he is converting? Lastly, there is a story of a phantom midnight Mass, where all the church is filled with souls out of purgatory. Native converts, Spanish Grandees, Padres, and Catalan Soldiers, all led by St. Junipero Serra himself. He sings the Mass with lanterns, candles, torches ablaze. So if you see light coming from under the doors and the windows aglow late at night, do not knock on the door. Why? Because the skull faced ghosts will open it and pull you in, when the Mass is done, they will take you with them back to purgatory and you will never be seen again until Judgement Day!