∙Regarding the Bill Green cartoon in the last issue, I have received negative feedback and criticism from some of our readers and sincerely apologize for running it. It wasn’t intended to be racist in any manner, but rather just a satirical social comment on the changes underway in this country and the challenges faced by people of color.

It completely missed the mark, and, in retrospect, understand that the cartoon should never have been published. I now realize that this attempt at humor trivialized the very serious issue of racism that continues to plague our society. I have learned from this experience, and, of course, have spent considerable time reflecting upon the lack of awareness that enabled me to publish the cartoon in the first place. I don’t consider myself to be racist in any way, but, those are easy words to say. What I have come to realize is that I do not know or even begin to understand the plight of marginalized people in this country. I don’t have any concept of their experience, know how they feel, the challenges they face being a person of color, or the prejudices they have to deal with in their daily lives.

So, to that end, I’ve been thinking more about what I can do to learn, and to support. I can clearly use the platform of the Ventura Breeze to support this cause. So, I have decided that it could be meaningful to add a new column, starting with the next issue, titled, Social Justice. The goal of this column will be to create an area of coverage/dialogue to help educate and to increase community understanding and transparency around this difficult societal topic.

Please feel free to send any content ideas to publisher@venturabreeze.com. If there are local challenges and opportunities, I would very much like to hear about them.

∙Father Junipero Serra’s statue outside Ventura City Hall -and his statues elsewhere- has become very controversial and many are being torn down. Ours was made from the wood carving by the late Wilbur Rubottom that is still on display in the City Hall atrium. Rubottom Cabinets is still active in Ventura run by his family. Even if it is removed, I hope the wood carving remains in City Hall because it is a wonderful piece of art. Many works of art are controversial.

As an alternative, a plaque could be added that explains why he is controversial so that his history is known, and people can understand why he’s controversial.

∙ There are calls to defund police departments. I think a better word would be to re-fund police departments and to reduce their loads and redistribute responsibilities to other agencies. and have other agencies deal with some of what they are asked to deal with. For instance, the homeless and mentally ill should not have a police response but a response by social workers and those trained to deal with this population. A uniformed officer showing up with guns can just escalate a situation that could be better handled by others. This is not what the police even want to deal with.

Look how well our park Ambassador program is doing with the homeless populations. They are not threatening but become friends and aids to those needing help and guidance with mental illness and drugs. When a situation becomes dangerous, they then call in the police.

∙ After the City Council approved it by a 4-3 vote, Ventura will require masks inside businesses and government offices, on public transit and in most other indoor locations open to the public. The city manager will now draft an emergency order calling out the details of the new policy. It will go into effect as soon as the City Council approves the new order.

∙The Food and Drug Administration has ended its emergency use authorization for hydroxychloroquine and chloroquine, drugs the president touted in the fight against coronavirus. Mr. Trump took a 14-day regimen of hydroxychloroquine himself. Based on the FDA’s continued review of the available scientific evidence, it determined the drug is “unlikely to be effective in treating COVID-19 for the authorized uses,” the FDA said. The agency added that “in light of ongoing serious cardiac adverse events and other serious side effects, the known benefits “no longer outweigh the known and potential risks.” The US now has more hydroxychloroquine than it knows what to do with. It started stockpiling the drug in March, and now has 63 million surplus doses of the drug.

∙A divided Supreme Court further advanced the cause of LGBTQ rights, ruling that a landmark civil rights law barring sex discrimination in the workplace applies to gay, lesbian and transgender workers. The court’s ruling is likely to have a sweeping impact on federal civil rights laws barring sex discrimination in education, health care, housing and financial credit. About time.

∙Trump blamed the lack of at least 13,000 people not attending his Tulsa rally on the protesting thugs. First of all, they weren’t thugs, but rather about 175 peaceful demonstrators. and is he saying 175 protesters kept 13,000 people from entering the arena. Why didn’t the 13,000 hang around outside to listen to him on the big screen? Plus, the other 40,000 people that were supposed to be outside. Because they weren’t there. When only a handful of people showed up outside to participate, the organizers took down the stage and big screen.

When he blamed the thugs, his fans booed as if this was a TV reality show. Oh wait, maybe it is, and we are in a parallel universe and Trump isn’t really our president.

Why can’t he just be honest and say, “I was disappointed in the turn out, but 6,000 supporters is a start and we will win the election.” instead of (like always) finding excuses and people to blame when things don’t go his way.

∙In a list of things Americans should do to protect themselves and others against coronavirus, Vice President Mike Pence mentioned everything health officials say Americans should do — hand washing, avoiding touching the face, disinfecting frequently.

He pointedly did not mention two of the Centers for Disease Control and Prevention’s main pieces of advice— wearing face masks and social distancing.

∙The Trump administration doesn’t have the authority to divert Pentagon funds to construct additional barriers on the US-Mexico border, a federal appeals court ruled, days after President Donald Trump’s visit to a section of the wall in Arizona.

Nothing in life is to be feared, it is only to be understood.
Now is the time to understand more, so that we may fear less.
~ Marie Curie 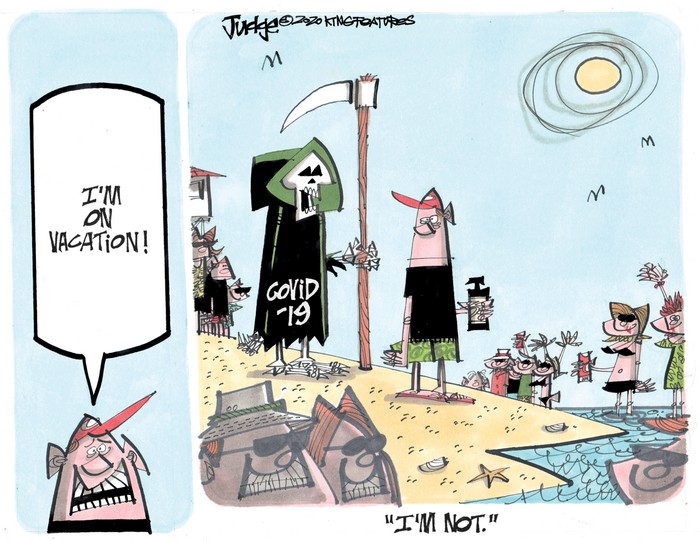