Saturday, January 10, saw the Kings Tide Project come to Ventura for a public meeting and tour of extreme tide events occurring January 10, and 11th. A crowd gathered at the Promenade to get a tour of the damage that has been done from sea level rise and the potential for more damage as ocean levels rise.

The Kings Tide Project is a research project run in conjunction between CSUCI and the Surfrider Foundation that focuses on King Tide events and its impact on ocean waves and its impact on the coast. King Tides bring tidal events that alter the size and duration of waves which bring flooding to our coast.

Ventura Councilmember Christy Weir led a group of interested individuals on a tour that stretched from surfers point to the river.

“Really happy to see the turnout as the public becomes aware of this” said Weir. The city council has an important role to play and will take action to include the concerns of the project and the public. “I think it is helpful to the city council that we are all working with the same information, the reality of what we are facing.” She added.

The Kings Tide project also asks the public to photograph and observe the waves and tide on morning walks along the beach and send them to the project’s website. Surfers are also asked to fill out a small form and answer some questions about the duration, size and quality of the waves.

“When we do our general plan, update we’re going to have a chapter on coastal resiliency.” She added. “It getting to the point where we have to deal with it, its an emergency.” 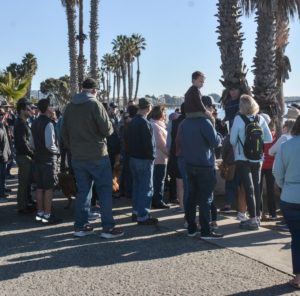 Taking steps to moderate the potential effects will be expensive and the city can’t do this without help from the state and federal governments. “we are working on coastal conservancy grants and also there are some federal FEMA grants.” she said.

Remember to take some photos of the waves and any erosion you might see and help this project by sending any photos or comments to the King Tides Project at https:/www.coastal.ca.gov.