Former Ventura Mayor and City Councilman Jim Monahan may no longer serve on the City Council, but his legacy will now live on forever.

A newly named street, James Monahan Way is at Poli Street and the City Hall parking lot as well as the gateway to the Ventura Botanical Gardens. 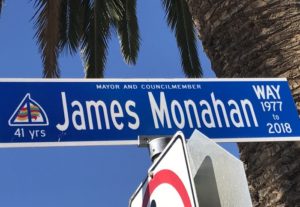 Monahan was honored with this street designation at his retirement council meeting in December. In his unprecedented run, Monahan served on the City Council from 1977 to 2018. He stepped down in December, having chosen to not seek reelection.

The street designation caps a year of honors for Monahan, who also recently accepted the 2018 Citizen of the Year Award from the Ventura Chamber of Commerce.

Among the countless ways that Monahan has touched the community is in his enthusiastic leadership and as founder of the St. Patrick’s Day Parade. American flags fly everywhere on patriotic holidays because of his work to organize volunteers to hang them. He’s also known citywide for his work advocating for the people of Ventura Avenue, where his father started American Welding in 1928 and where he still maintains an office.

An early advocate for a Veterans Home in Ventura County, Monahan got to see that happen, and he continues to serve on the Gold Coast Veterans Home Foundation. He has retired from elected office but certainly not from community service.