On Nov.8 the Mayor’s Arts Awards were held at the Museum of Ventura County before an enthusiastic audience of several hundred. The Mayor’s Arts Awards is a collaboration of the City Manager’s Office and Parks, Recreation & Community Partnerships Department. It recognizes those who have made a significant contribution to the arts in 2018.The selection committee was Peter Graves, Georgeanna Lees and Jen Livia. 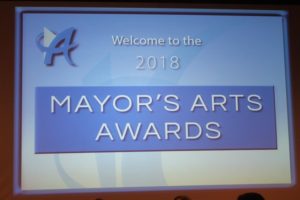 Matt LaVere, Deputy Mayor opened the evening. “On behalf of the City of Ventura and the City Council, I would like to thank you for attending the 14th Annual Mayor’s Arts Awards. This is our opportunity to recognize the extraordinary accomplishments of seven distinguished artists, patrons, educators, and

leaders. Ventura takes great pride in supporting our local arts community. Arts and culture help to promote the unique identity of our city. These seven incredibly gifted individuals are diverse in the gifts and talents that they provide to our community daily and have made indelible contributions to our city.

I would also like to extend my thanks to this year’s Awards Selection Committee members.”

This year’s Art Award winners are:

Elena Brokaw Arts Leader. She has served as a leader in the arts in Ventura for over 25 years. She began her career working in the City of Ventura’s Cultural Affairs Division in 1993. She created Ventura ArtWalk and Java Jump. She served as the founding director of the Ventura Chamber Music Festival, co-authored Ventura’s Cultural Plan, Creating California’s New Art City, worked to secure $1 million in grant funding to seismically to retrofit the historic Olivas Adobe, worked on the Working Artists Ventura mixed-use housing development and now serves as the Executive Director of the Museum of Ventura County.

Broc Ellinger Emerging Artist. Broc is an artist from Ventura. Broc focuses his creativity on the medium of photography. His recent endeavors into photojournalism and portrait work have established him as a prolific and diverse photographer. He received the 2016 Ventura County Star Favorite Local Artist award, the 2017 Ventura County Fair Professional Division Best of Show, and 2017 1st place California Professional Firefighters Contest.

Jasmine Duncan Student Artist. Jasmine is a stand-out scholar, athlete, and artist. Jasmine first began dancing when she was four years old. She has developed her dance skills at the Ventura County Ballet Company, Joffrey Ballet in Chicago and received special tutelage from the San Francisco Ballet. In addition to her ballet, she is a talented artist who was nominated for Featured Artist of the 1st Annual VUSD Student Art Show. As a scholar she is on the Distinguished Principals honor roll and is enrolled in Advanced Placement Courses.

Stefoni Rossiter Arts Educator. Stefoni pursued a career in theater in her twenties and then embarked on her life’s calling, being a teacher. She taught first at the preschool level, then elementary in Ventura Unified School District’s (VUSD) open classroom then as Ventura High School’s drama teacher.

Kelly Stevens Creative Entrepreneur. Kelly is the owner of superbuzzy, Inc. Kelly has contributed to the community in many ways over the years. Her most recent contribution was to coordinate the collection of donated materials and quilts from around the world for the Thomas Fire Quilt Project – a project which has, at last count, donated over 1,000 quilts to families who lost their homes in the fire and subsequent mudslides.

John White Artist in the Community. John is a painter, sculptor, and performance artist who has been exhibiting for over 40 years. John’s work is included in numerous museum collections, including Los Angeles County Museum of Art, Guggenheim Museum in New York, La Foret Museum in Tokyo, and many others. He is the recipient of three National Endowment for the Arts grants and was recognized as the 2018 Artist of Distinction at the Ventura ArtWalk.

Patti Channer Arts Patron. Patti is an elegant example of community art patronage. She has long supported the arts in Ventura including Focus on the Masters, Ventura County Arts Council, Ventura ArtWalk, Ventura Botanical Gardens and the Ventura Film Society. When Patti takes hold of an idea, or cause she can single-handedly take it from concept to reality in record time.