Robots being manipulated by student designers and programmers attempting to score points in the robotics competition. Photos by Richard Lieberman

On Saturday, October 27, at Holy Cross school in downtown Ventura the Ventura County Office of Education sponsored a VEX Robotics competition for middle and high school students from Ventura County. There were 24 teams and more than 150 students competing. The contest is now in its fourth year.

Local Ventura County students, relying on guidance from teachers and industry specialists, have designed, and built robots. The robots have been designed to score the most possible points in qualification matches and skills challenges. 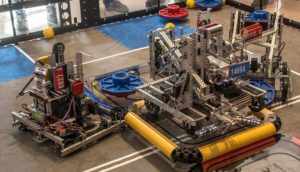 John Tarkany Coordinator at the Ventura Office of Education has been responsible for all of student competitions in Ventura County. He has had responsibility for Mock Trial, Academic Decathlon, and the Science Fair. “We saw robotics were taking off and both the engineering and programming to build them.” Tarkany said. “We started looking at various robotic competitions and there were two that stood out First Robotics and Vex Robotics.” He added.

The first 30 seconds of each match in the contest is autonomous mode where the robot is programmed to perform a function. “I have been really impressed with some of the pre-programmed tasks.” Said Tarkany. The programming requires the robots to pick up balls and throw them at a flag and knock it over for points.

Competing teams were from grade levels from six to twelfth grades. Winning teams will compete in a statewide competition in March or April of next year.