Eight months after losing her home on Nob Hill to the Thomas Fire, Becky Caron and friend Stephanie Green began a project to help themselves and others heal by making heart shaped glass mosaics on rocks.

“I don’t want people to forget what happened in December, none of us have been able to rebuild our homes yet and we are broken”, said Becky.

Stephanie’s home on Montclair (just below Nob Hill) was not lost, but there was enough damage to the kitchen that she was relocated to a rental in Oxnard Shores where Becky and her husband had also found temporary housing. In February, the two met up one day while each walking their dogs on the beach.

About eight other gals have now joined Becky and Stephanie with their “art therapy”, including Candy Polhemus after her son Gary was seeking some sort of support for his mother who not only lost her home to the Thomas Fire but had also just lost her mother and then her husband passed shortly after the fire struck. 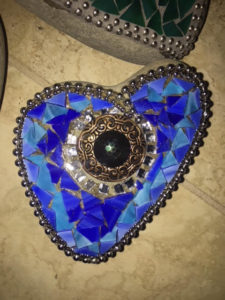 Becky told me, “It’s therapeutic to create things with your hands, it’s like putting pieces of our hearts back together.”

Creating the mosaics is a 2-day process, the first day is to cut and glue the glass and a couple days later (after the glue has had time to dry), the rocks can be grouted. Since February, the group has met twice weekly, every Saturday morning and usually on the following Thursday.

Much of the glass and costume jewelry displayed on the mosaics has been donated to them. In fact, donations have come from as far away as Nevada when a business called “Stained Glass Dreams” sent 3 boxes of glass after being “touched by our story”.

On August 25th, with the help of David Gardner, the 60 mosaic rocks took part in the Art Walk @ The Shores, starting at Wooley and ending at Harbor Blvd. Opening her Oxnard Shores rental home, Becky displayed the pieces for anyone who might like to have one. She stated, “we’re not selling anything, we want to heal people’s hearts, we never thought in a million years our homes would be lost in the fire and most of us were not able to get anything out, so we’re rebuilding our hearts from the fire- piece by peace”.