What’s up with Ventura Police Dept?

Seems they have become the henchmen for the red county that simply does not want poor and homeless folks living here.

Case in point I had an appointment with a health practitioner in downtown Ventura. I parked on Santa Clara St. When I came back to my tiny home on wheels (a motorhome) there was a ticket in the windshield, for parking an oversize camper in the city limits. Okay, so #1 there are no signs displayed letting people know they cannot park RV’s in downtown Ventura. And #2 I cannot afford the dang fine.

I called the police dept in Ventura to challenge the ticket and even after I explained that I am a senior on a fixed income with health issues, I: e visiting a doctor in Ventura and I cannot afford the $72.00 fine, I was told well you should know the law and the ticket would stand and had to be paid. After which I spoke with a dozen city and county agencies that offered no help in this regard.

Today the citation stands and I still cannot afford a $72.00 fine. If it is illegal to park a small RV in the streets in Ventura—post it!

What’s up with Ventura?

Jay: Oversized motorhomes are not allowed to be parked on streets anywhere in Ventura not just Downtown so posting would need to be on every street. So police are just doing their job. If you call 339-4401 you can get permission to park in the street for a limited amount of days. Sorry that this happened to you.

No one likes taxes, but we all have to pay them, even people who are working without documentation. Many workers who contribute to the economy can’t access services their tax dollars support. My neighbor Jesus was 27, undocumented, and working long hours at a bakery. His stomach bothered him for months, but he was afraid to go to a hospital, and could only afford a neighborhood cash clinic where they told him he had a virus. When the pain was too great and he went to the emergency room, he was diagnosed with advanced cancer. He died a week later. It’s wrong that we expect people to pay taxes while excluding them from routine and life-saving health programs, paid for with their own tax contributions. Our economy is driven by hard work of people like Jesus, who deserve life-saving access to health care services, no matter where they were born.

Pre-president Trump “We should stay the hell out of Syria. The president must get congressional approval before attacking Syria- big mistake if he does not!”

The first time that I have agreed with him. 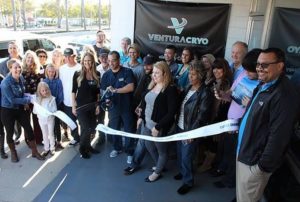 On March 15th a Ventura ribbon cutting was held for Ventura Cryo, conveniently located inside The Sauna Studio at 3439 Telegraph Road, 380-3737. In our last issue we had their address and phone number wrong. They Provide a holistic body cold immersion modality called Whole Body Cryotherapy which significantly reduces inflammation in the body, eases joint pain, improves sleep, and many more health benefits.Visit their website venturacryo.com to learn more about cryotherapy and its benefits.

I fear the day that technology will surpass our human interaction. The world will have a generation of idiots.
~ Albert Einstein