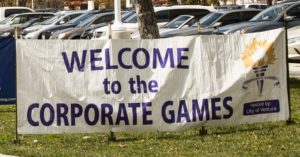 Eighty Ventura and Santa Barbara County businesses will participate in the six-weeks of friendly competition. The actual games to be played on this day were canceled due to the soggy grass from the previous two days rains.