Thank you for the Thomas Fire coverage about the Ventura Botanical Gardens. There was so much loss in our City. The stories you shared about VBG generated an outpouring of support. Right now, the Gardens are closed; we’re assessing the damage and developing our next steps plan. The trails and plantings look recoverable but hydroseeding before the rains come, is our top priority. Erosion is a major concern. And, as our community learns of this critical need, many have turned to our website or Facebook to donate funds for assisting with that process. This support is very encouraging. Together, we’ll make the Gardens grow. 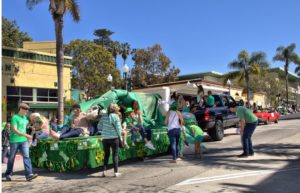 In 1999 Councilman Monahan asked Msgr. Patrick O’Brien, pastor of the Old Mission, to be the Grand Marshal for the 1999 St. Patrick’s Day Parade. Msgr. kept refusing because it just wasn’t his “thing”. However, he finally gave in to the request on the one condition that the “pig” not be used any more. Msgr. explained that the pig is a negative symbol to the Irish. Mr. Monahan agreed. However, it is evident he went back on his word!!

The day of Msgr. O’Brien ‘s funeral, going to the cemetery, it just happened that I was assigned to the same car with the then mayor of Ventura. (Sorry, I don’t remember his name.) Somehow, the topic of the pig came up. I spoke up and told the others in the car about the promise made to Msgr. O’Brien when he agreed to be the Grand Marshall. To my surprise, the mayor spoke up and said it was true. He was there when Mr. Monahan made this promise!!!

I’m celebrating the demise of that pig as I’m sure Msgr. O’Brien is doing from heaven!

Kath
Don’t celebrate for too long the pig shall return. (And, by the way these facts have not been verified.)

Where was the water when we needed it most?

by Nick Bonge Co-founder Neighbors for the Ventura Hillside

Amid many reports of fire hydrants running dry as hillside homes burned and much speculation about what happened, I had a conversation with Kevin Brown, Ventura Water General Manager. Those of you who know me know that I am not always completely supportive of City staff. However, to my surprise, I was very impressed with Mr. Brown’s technical background and his grasp of the problems with our Water Department. He was hired about 4 months ago and, based on this conversation, I believe we have the right person in the job.

Mr. Brown acknowledged that large parts of the City’s pumping system, that replenishes hillside tanks, went down due to the power outage, seriously impeding our firefighters’ ability to save homes. He said that the City has 23 pumping stations, only a few of which have back-up generators.

When I asked if he believed that we should install back-up generators at all stations, he stated that even after the City got portable generators to the pumps, they could not replenish the tanks adequately, in part because the fire took out numerous home irrigation systems causing a major hemorrhage of water.

Teams of technicians were deployed to manually shut off more than 100 valves before any real progress could be made in refilling our tanks. That took 2 days. In short, he stated that we have an old water system that has grown in a piecemeal fashion with City development. The system has become non-centralized with overly complicated interconnections. Fixing it will require a monumental effort which must be based on a well thought out plan which could be modeled on one of many possible approaches. For that, Mr. Brown had several fascinating ideas and was open to additional ideas and input from the public.

I came away with the opinion that this was not really a matter of someone being asleep at the switch but, that the City has never seriously considered this kind of disaster scenario and was totally unprepared at all levels. Avoiding this kind of situation in the future will take real leadership and a tremendous amount of commitment, ingenuity, time and cash.

Let me try to enlighten you on how designated districts would help the under represented in this city.

First you have to admit there are under represented areas. At least looking at the possibility , would be a start. Thats usually referred to as having an open mind.

For years I’ve noticed the Ventura Avenue area as a run down area, with a largely hispanic community living there. Most people that reside in Ventura would agree that for years, this was the poor part of town, and looked it. It was an overlooked area with not a lot of voice.

Though promised a pool years ago, the west side still does not have one. The east end does. Starting to get the picture ? Getting a new very limited west side park doesn’t make up for some of these forgotten real issues.

Concerns of affordable housing that fits the need, and more useful and contemporary facilities , are just a couple of west side area concerns.

Having a resident from that district might help matters with that areas personal needs. ( living midtown with an oceanview should not qualify as an Avenue area representative). Each area is very unique and should be treated as such.

The fact that you personally have not noticed any bias does not mean it doesn’t exist.

How can a person living in an area that doesn’t concern them, not be bias ? Missing or not giving importance to local district issues is not a rarity.

Being disconnected is a very prominent condition under our current leadership.

It’s time to take those rose colored glasses off.

Mike: Researching the pool item but most of Ventura doesn’t have a pool. Jim Monahan has always been concerned about the “Avenue” so we can only wait and see how districting works. See the approved district map in this issue. Voting for District1 ( the Avenue) will be this year. And, by the way if my mind was more open a bird could fly threw it (I’m such a good straight man).

Our lives begin to end the day we become silent about things that matter.
~ Martin Luther King Jr. (1929–68)