Sixteen Ventura Police Officers were recognized alongside officers throughout Ventura County at the 41st Peace Officers of Ventura County Law Enforcement Medal of Valor Awards Ceremony held on October 7 at the Ronald Reagan Library. The Medal of Valor is awarded to officers for extraordinary bravery, above and beyond the call of duty, where risk of life existed and the officer was aware of such risk.

Incident One: On December 17, 2015 at 8:30 in the morning the Ventura Police Department received a 911 call stating a female subject had been shot. There were limited details to the shooters whereabouts. Officers arrived on scene and immediately went into action. As dispatchers attempted to gather further information, a child could be heard crying in the background. As officers formulated a plan a female victim exited the residence. It was obvious that she had sustained multiple gunshot wounds. It was later determined that she had 18 wounds. As the victim exited the residence officers, without hesitation still not knowing the whereabouts of the shooter, formed an immediate reaction team and went into rescue mode. Officers rescued the victim and immediately began first aid until medical personnel arrived on scene.

After the female victim had been rescued officers staged at the doorway of the residence. A male subject could be seen lying at the top of the stair case. He was later pronounced deceased. A child could be heard screaming from an unknown location within the apartment. The suspect’s location was still unknown but officers made entry into the residence to render aid to the child in distress. The distressed child was unharmed. Officers rescued the child.

The suspect’s location was still unknown. Agencies throughout Southern California were searching for the suspect. The Ventura Police Department posted a picture of the suspect on the department’s Facebook page. A Ventura resident was vacationing in Mexico and came across the photo on social media. She was eating at a restaurant in Rosarito Beach and noticed the suspect was also at the restaurant. She called the Watch Commander to report identifying the suspect and detectives then worked with authorities at the border to apprehend the suspect. The suspect is now awaiting trial for murder and attempted murder. 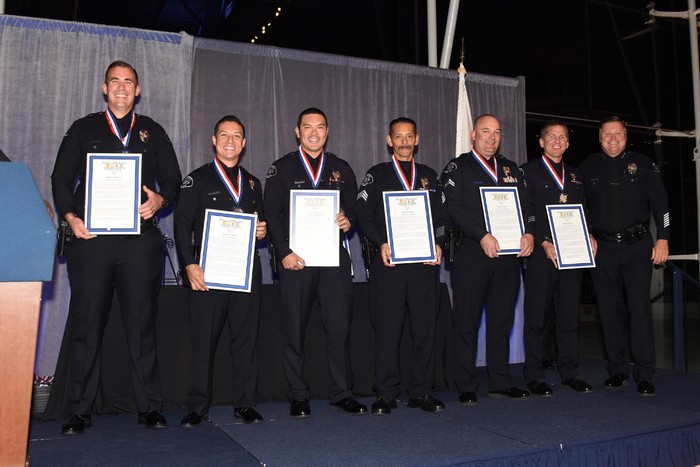 Incident Two: On June 29, 2016 two people were shot, one fatally on E. Main Street in Ventura. The shooter fled the area in a vehicle occupied by additional subjects. Officers responded to the shooting scene but three officers began patrolling the surrounding area and located the suspect vehicle. The suspect vehicle drove recklessly at speeds over 100 MPH through areas of heavy pedestrian and vehicle traffic. The suspect vehicle ultimately crashed into an orchard in east Ventura. The driver fled the vehicle leaving the three injured subjects in the vehicle. The vehicle caught on fire with the subjects trapped inside. At this time, officers were completely exposed to the suspect who had fled into the orchard, the weapons used were still outstanding and the subjects were wanted for murder. The officers made the choice to sacrifice their safety and rescue the occupants before they were engulfed in flames. Officers approached and rescued the occupants with the vehicle on fire. The driver, who tried to escape, was later apprehended in the orchard. The subjects are now awaiting trial for murder and attempted murder.

Corporal Knackstedt, Detective Conger, Detective Gutierrez, Officer Almaguer, Officer Dillard and Sergeant Medina were awarded the Medal of Merit for risking their own lives to save the occupants of the vehicle who otherwise would have been trapped in flames.