For the fourth time in eight months the Ventura County Local Agency Formation Commission (LAFCO) rejected an application by the City of Ventura to expand its boundary.

The application was for a new development known as Northbank, which is a project to allow for the construction of 193 residential units in East Ventura near Saticoy.

LAFCO heard the proposal on four occasions: November 16, 2016, February 15, 2017, April 19, 2017, and again on July 19. LAFCO has not been convinced that Ventura has an adequate long term water supply for its new developments.

LAFCO’s CEO showed that the Ventura’s own documents demonstrate that Ventura has a water deficit. Apparently, Ventura believes that there is “water aplenty” but they are unable to explain “where it is”. LAFCO Commissioners are simply doing the job required under California law. Also, it is the obligation of the City of Ventura to fulfill its commitments to provide necessary information.

The people behind the Northbank project may be rightly frustrated, but Save Our Water Ventura is more concerned about our current residents.

How can Ventura continue to give away scarce water supplies? Isn’t it time for a water connection moratorium?

Charles Spraggins, Save Our Water Ventura

The City reviewed its water capacity and confirmed there is adequate water supply to expand the City’s boundary and accommodate new construction in east Ventura. While current water supplies are indeed strained due to the drought, there is an adequate amount to serve this and other projects that have been in the works for many years now. We agree that the long-term sustainability of water supplies is vital. That is why the City is working hard to diversify its water portfolio and augment supplies with new sources. This includes a potential connection to the State water system within the next 3-4 years and the construction of an Advanced Purification Facility for Potable Reuse by the year 2023. These projects will not only augment existing water supplies and improve system reliability, but will also have the ability to enhance the quality of drinking water on the east end of the City.

Please know I so much appreciate the attention the Breeze brought to Estella’s (the dog) situation and her need for help to get her surgery and medical treatment paid for. As a result of Estella’s photograph and story on The Pet Page in the July 5 – July 18 issue of the paper much more needed money was donated. Thank you so very much. I am sure the entire Buddy Nation crowd feels the same way I do.

Also thank you for letting us know about the passing of precious Sherlock Patterson. Your paper was the only way some of us found out. To honor Sherlock’s precious life and memory I made another donation to the Estella fund in Sherlock’s name.

Many, many people in Ventura depend on the Breeze as an important source of community news. Thank you for making this possible.

PS: I also thought information about the R.U.F.F. program was vitally important. I do hope other communities adopt similar programs. And the article about Gavel was perfectly delightful. I most certainly enjoyed it. So thanks again.

No one can make you feel inferior without your consent.
~ Eleanor Roosevelt 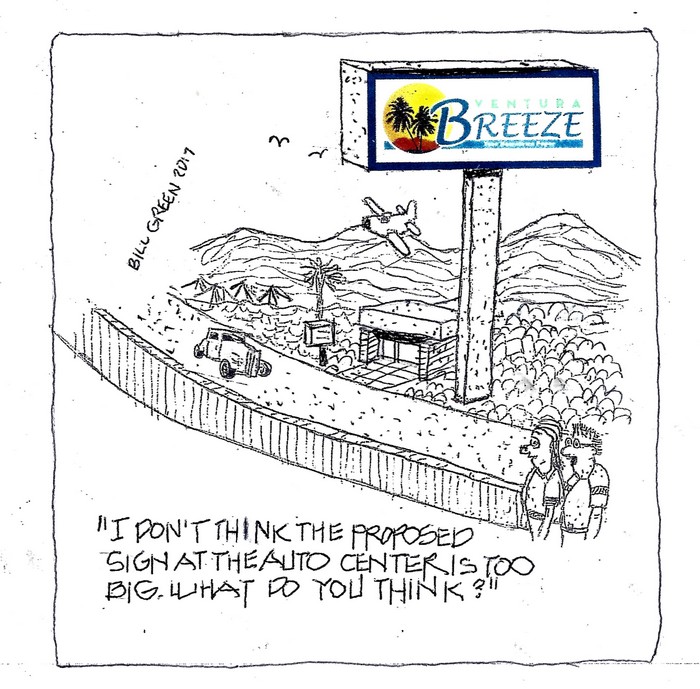