On June 20, at approximately 9:15pm, an alert citizen called the Ventura Police Department to report a suspicious person possibly casing a house in the neighborhood. The suspect, later identified as 25 year old Venture resident Joe Osuna, had parked a bike in front of a residence and then walked around the side of the house. Officers arrived on scene as Osuna was returning to his bike and attempted to contact him. Osuna ran away from the officers but was apprehended after a short foot pursuit onto the beach. Osuna was found to be in possession of illegal drug paraphernalia, as well as a lawn ornament that had been stolen from the victim residence.

Osuna was arrested and will be booked at the Ventura County Jail for prowling, evading arrest, petty theft, and possession of paraphernalia.

On June 21, at approximately 4:40am, the Ventura Police Department Command Center received a call from an alarm company reporting a residential alarm being activated in the 6000 block of Loma Vista Rd. Relaying information through the alarm company’s dispatch, the homeowner reported that someone had broken into the residence and fled on foot after taking property. One of the items taken was a cellphone.

Officers responded to the scene and contacted the victim homeowner. Additional officers began checking the area. While checking the area officers contacted a subject, later identified as 25 year old Oxnard resident Jesus Flores, who was found walking several blocks away from the location of the burglary.

In addition, another officer found a suspicious parked vehicle on another nearby street. At the time, this vehicle was not connected to Flores, although appeared to have contained stolen property inside.

As residents began waking up, several more crimes including additional thefts from vehicles and a burglary to a shed were being reported by residents throughout the same neighborhood. Suspecting the suspicious parked vehicle was somehow involved, additional officers responded to watch the vehicle.

When officers searched Solorio, he was found to be in possession of the cellphone stolen from the earlier residential burglary. A large amount of stolen property was also found during a search of the vehicle. Officers were able to determine Solorio and Flores were involved in the crimes. Both were taken into custody.

Street Crimes Detectives assisted in the investigation and based on information they were able to obtain, later conducted a search warrant of a residence in Oxnard. During the search of the residence, numerous stolen items were found and recovered. A third suspect, later identified as 28 year old Oxnard resident Rudy Ramirez, was arrested at the residence.

At the conclusion of the investigation, it was determined Solorio, Flores and Ramirez were responsible for committing approximately 10 residential burglaries throughout the city of Ventura over a 3 month period. All three suspects were booked into the Ventura County Jail for multiple counts of residential burglary, possession of stolen property and conspiracy.

Much of the stolen property that was recovered during the investigation has been returned to the owners.

Anyone with information or feel they may be a victim of a crime related to this investigation is asked to contact the Ventura Police Department at 339-4428.

On June 23, at 7:45pm, the Ventura Police Department Command Center received a call from the Pacific View Mall security reporting a subject disturbing and refusing to leave. It was reported the subject, later identified as 23 year old vagrant Nathan Journigan, had previously been warned numerous times by security not to return to the property.

Upon arrival, officers contacted Journigan and at the request of security, he was again told to leave the property and warned about trespassing.

Several minutes later, Journigan was observed entering back into the mall. Officers located him in the food court and as they started to escort him out, Journigan began to resist and spit in the face of one of the officers. He then made verbal threats to harm the officers.

Journigan was arrested without further incident and later booked into the Ventura County Jail for felony resisting arrest, misdemeanor battery on a police officer, criminal threats, and trespassing.

On June 25, at approximately 12:30am, the Ventura Police Department Communications Center received a call froma resident in the 700 Blk of Saratoga Ave regarding a suspicious male subject seen in their backyard. Officers responded to the area, but were unable to locate the subject. As the officers were in the neighborhood looking for the subject, they saw a male, later identified as 43 year old Ryan Burchell running down Vernon St. Officers told Burchell to stop, but he refused and ran into a neighbor’s backyard.

Additional officers responded and surrounded the neighborhood in an attempt to locate Burchell. Burchell jumped into several neighbors’ yards and then opened the backdoor to a residence. The resident confronted the Burchell as he was standing in the rear doorway. Burchell then ran towards the front of the residence where officers confronted Burchell and took him into custody without further incident.

Burchell was identified as the subject in the backyard of the house on Saratoga Ave. Burchell is on active parole and was ultimately arrested and booked into the Ventura County Jail for prowling, resisting arrest, unlawful entry of an occupied dwelling and a parole violation.

On June 25, at approximately 5:40pm, the Ventura Police Department Command Center received a call from a concerned citizen who reported that WINCO Loss Prevention Officers were in a struggle with a male subject who was refusing to cooperate with them. When officers arrived on scene, the suspect was detained and brought back to the Loss Prevention Office.

Hansen was arrested and booked at the Ventura County Jail for Robbery. The Loss Prevention Officer received minor injuries as a result of this incident.

Anyone with information or is a witness to this crime is asked to contact the Ventura Police Department at 339-4488.

On June 26, at 10:45pm, VPD Patrol Officers conducted a probation search at a residence in the 300 Block of Rodgers St. During the search, officers located several items consistent with those used to convert marijuana in to honey oil. Due to the potential danger these items pose, officers evacuated all of the occupants, which included (3) male juveniles, and notified VPD Detectives.

Street Crimes Unit Detectives responded and confirmed the items in the residence were consistent with those used to make a drug conversion lab, specifically marijuana butane honey oil (BHO). Detectives subsequently obtained a search warrant and seized all of the items. During the investigation, it was determined that 55 year old Ventura resident Robert Schlichter resided at the residence and obtained the items in an attempt to extract honey oil from marijuana.

Schlichter was booked at the Ventura County Jail for manufacturing a controlled substance, manufacturing concentrated cannabis with volatile solvents and child endangerment, all felony charges. Nobody was injured as a result of this incident. 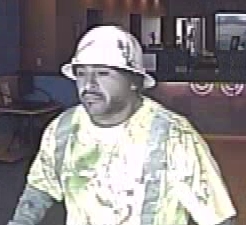 On June 30, at 2:09pm, the Ventura Police Command Center received a call from an alarm company reporting a robbery alarm being activated at Rabobank, 1171 S. Victoria Ave. Shortly after the call, an employee of the bank called 911 and confirmed that a robbery did in fact occur. Upon arrival of the officers, they determined the suspect had already fled the bank and was last seen leaving the area on a small BMX style bicycle, westbound through the shopping center. Hispanic male, 30’s, wearing a white construction type hardhat, bright fluorescent yellow vest and black pants.

During the investigation officers learned the suspect entered the bank and approached one of the open teller windows. At the counter, the suspect produced a black semi-automatic handgun from inside a large envelope he was holding and demanded money from the clerk.

The clerk gave the suspect an undisclosed amount of money, and he fled the bank.