On April 29, at 3:33pm, Ventura City Fire Department responded to a report of smoke coming from a two story residential home in the 2300 Block of Woodpecker Ave.  Upon arrival fire crews found a fire burning in a bedroom on the second floor that had extended into the attic. Firefighting efforts were initially hampered by boarded up windows and locked doors throughout the structure. Firefighters extinguished the blaze 25 minutes after arrival. Firefighters searched the house for occupants during the firefighting effort but none were found. 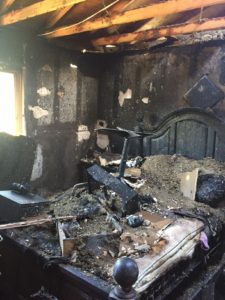 Two firefighters suffered minor injuries when portions of the second story ceiling collapsed.  Both firefighters were treated and released from a local hospital.