A recent meeting was held at school district headquarters to discuss racism concerns.

Since the January 13 tweet by two Buena High School students containing altered images of themselves holding nooses around two black men, the community has erupted in protest. The school district is fielding phone calls, the students are facing discipline, and a group of local organizations have called for the district to take steps against racism and discrimination.

The group demands the district adopt three resolutions:  safe haven status for all students;  ethnic studies classes; adopting a program called restorative justice, in which people involved in a dispute talk about it. The group spoke at a meeting of the Ventura Unified School District board. 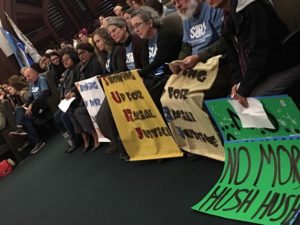 “Sending an apology letter isn’t enough anymore,” Ocil Herrejon, a youth organizer for CA– USE, the Central Coast Alliance United for a Sustainable Economy. “In the current political climate, we need to address these issues, make a safe haven for students of color on campus.”

Yes, school should be a safe place for all students. But is it possible that one incident isn’t a fair representation of Buena students or district policies?

In the seventh grade, my best friend, Dawn, and I were bored. It was the seventies, a decade— without cell phones, internet or satellite TV. But hey, we were capable of entertaining ourselves. We weren’t spoiled rich kids. We could sew, cook, and be creative—and stupid.

One winter day, we were discussing rumors that our single male history teacher was dating our single female PE teacher. Tame stuff by today’s standards, but I was a Perry Mason fan who understood extortion, my friend—a gifted writer. Together we were middle school morons who regaled ourselves by writing a blackmail letter. We exorcised our boredom by imagining our teachers’ faces when they found out that someone was on to their little tête-à-têtes. Would they be embarrassed? Would they pay for our silence? It was all in the wording: careful, adult-type wording.

Did we ever plan to extort money from our teachers? Nope.  But  Dawn and I became steeped in scandal. My mother found the letter. The torn, discarded pages were discovered by my mom who was certain that I was a budding sociopath—a criminal in the making—a peccant, penitentiary-worthy juvenile delinquent! She was prepared to call the police, the school and the district attorney.

How did I get off death row? A levelheaded, loving adult spoke up on my behalf. My grandmother talked my estrogen-challenged mother off the ledge. Grandma was a wise woman who knew that kids did stupid things— like writing blackmail letters and pretending to be white supremacist racists. (Isn’t it Dr. Phil who says, “never expect children to deal with adult issues?”) We now know that our brain is not mature until our mid-twenties, but my grandmother had figured it out long before neuroscience did.

I didn’t grow up to be an extortionist or even a criminal. My friend Dawn now owns an insurance agency, so I guess you could say that she is “still in the extortion biz.” Neither of us have ever been jailed or have ever made money illegally unless you count the money we found in change slots. Maybe doing stupid things is just a part of being a kid . . . maybe taking it down a notch is another way to approach the problem.