Some of the arundo was taller than the students. Photos by Bernie Goldstein

On Aug. 29 the City of Ventura partnered  with over 500 students from Cal Lutheran University for their “You Got Served” project. The school’s largest service-learning project (in terms of student participants). Cal Lutheran’s entire incoming freshmen class and transfer students worked alongside city staff and the Ventura Hillsides Conservancy to remove the invasive arundo donax — which kills native plants, shelters illegal activities(homeless) and is a fire hazard  in the Ventura River bottom. 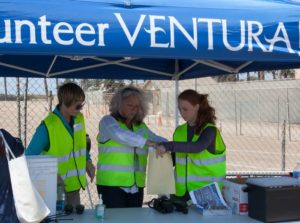 Cal Lutheran’s Community Service Center has worked with the city’s Volunteer Ventura! office on the university’s annual “You Got Served” program since 2008. The partnership has allowed all the incoming students to work together on a single project that introduces them to Cal Lutheran’s commitment to service and justice and connects them with the local community in a meaningful way. Together, the city and university came up with the environmental clean-up program.

During the last eight years of the program, Cal Lutheran’s students and city staff have:

Assisted with the restoration efforts in the Ventura and Santa Clara Riverbeds, removing arundo and more than 57 tons of trash and debris

Cal Lutheran President Chris Kimball along with other faculty and staff members also assisted students in this service learning project intended to connect students to our local community and show what can be accomplished through public-private partnerships.