The two trees are timely rooted
Once five now two they are saluted,
Bark on a tree and branches that grow,
My heart races as I hike to them, tally ho..

Sitting under them I reflect on site,
I look to the ocean that gives a Pacific light,
You might call them a token of mystery,
As they were grown for their views of inquiry…

Over the years the trees were toppled and planted,
History for this story may always be slanted,
Grown by its roots they became Fishermen’s Sight,
Pranksters chopped down 3 on Halloween night..

They have a marriage with Ventura once a secret vow,
Never spoken over years of a faithful service until now,
Today they rage with a celebration voice,
Making Ventura the two tree tourist choice…..

Mr. Chacon attempts to come to common ground regarding the dynamics of this controversial issue. Short-term vacation rentals (STVRS) are a business. Business licenses are issued, business license fees are collected, certain rules are applied, and taxes are collected in behalf of the city. People rent homes to provide housing for their family that otherwise they may not be able to afford by conventional purchases. If that is the “rental right” Mr. Chacon refers, I agree.

However, paramount to the structure of any city is its zoning codes. All cities have these codes. They define what “uses” are permitted in those zones, and the zoning codes are “dominant” over any other actions by the city. With few exceptions, businesses are not allowed in residential zones. This is especially true of zones that may be under greater pressure to violate those codes.

The framers of the zoning codes in Ventura realized this and put greater use restrictions on the beach residential zone. Now, with the short-term ordinance in Ventura, that is subordinate to the zoning codes, some street lanes are impacted by up to 30% STVRS.

Most people choose to live in residential areas and not be interfered with by businesses to a residential life style. STVRS interfere with that “right”. Many would agree that the Coastal Commission has overreached its original intent, and it certainly is now. There is no violation of the “Act” by enforcing zoning codes. Yes, access by citizens to the coast should be protected, but not at the expense of deteriorating homeowners rights or the zoning codes.

Breeze: John was referring to an article that Mr. Chacon wrote in the VC Star. 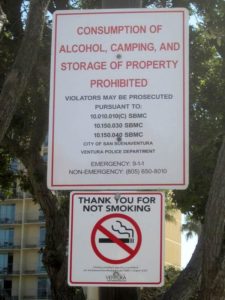 This signage or something like it should be used in the Ventura Riverbed also and at the end of Seaward.  I am happy to see it on the promenade.

Most of us have jobs that are too small for our spirits.
~ Studs Terkel