On Aug.27 community members and dignitaries gathered for a Green Street celebration and demonstration event on Hartman Dr. in Midtown. It was hosted by the City of Ventura’s Public Works Department and demonstrated the new storm water improvement project. 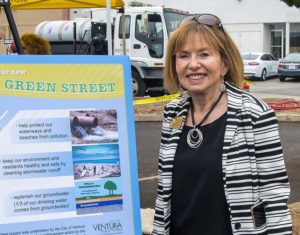 Using “curb cuts” and pervious concrete, the Green Street collects, stores and infiltrates stormwater runoff from the street, which helps protect our waterways and beaches from pollution and recharges our groundwater. Residents also learned about the new residential curb cut permit, which allows eligible homeowners to create their own bio-swale in their parkway – the area between the sidewalk and street.

As city staff demonstrated how the pervious concrete and bio-retention cells help collect, clean and infiltrate stormwater — instead of letting it flow to the ocean  Mayor Erik Nasarenko told the crowd “ The Ventura Midtown Green Street project will capture stormwater runoff draining from Hartmann Street and parts of the adjacent parking lots.” 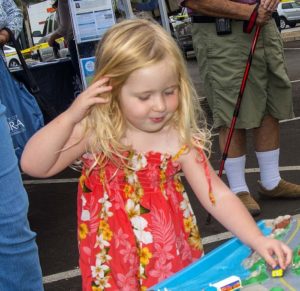 “As you probably know, stormwater often contains pollutants that are washed from our urbanized area, such as motor oil, heavy metals, and harmful bacteria.

Before this project was built, all of the water runoff that drained from Hartmann Street and these parking lots would carry these pollutants directly to the ocean that we swim and surf in.”

“Now, much of that water will be captured by this new Green Street project.

The bio-retention cells contain a layer of soil that helps filter many of the pollutants out of the water. Below the soil is a layer of gravel that hold the water and allow it to infiltrate into the ground to recharge our groundwater.”

The Green Street project was undertaken by the City of Ventura as part of the settlement of an enforcement action by the Los Angeles Regional Water Quality Control Board.

More information is available at www.cityofventura.net/GreenStreet.