Soon there will be many unfinished offices in Ventura to lease.

Brooks Institute a visual and media arts school announced on August 12, it plans to shut down operations. The school has cancelled its fall semester and will cease all operations by October 31st according to a letter sent to Brooks students.

The letter authored by Transition Officer Kristen Howard states, “Changes in economic regulatory conditions in recent years have had a significant, prolonged, negative impact on instruction, we have attempted to mitigate the problem through contraction, strategic planning and innovation, but with only limited success. Because we do not expect the adverse conditions to change in the foreseeable future, our only responsible course of action is to proceed to closure.”

The school also has announced it will continue to offer administrative student services, and support which will include transition services through October 31st. 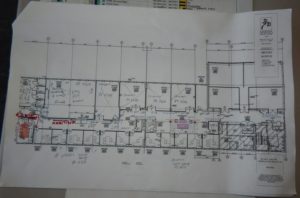 According to Kristen Howard, “We are working to identify other schools that may be able to take current on transfer, or to assist with a teach-out, so those who have not graduated as of Brooks’ closure will have the opportunity to complete their program or one similar to it. We will provide additional details regarding any transfer or teach-out opportunities as soon as such details become available. “

The school was originally founded as the Brooks Institute of Photography in 1945 by Earnest Brooks Sr. The original core curriculum was developed around economics, public speaking, and business management. Brooks Sr., turned over the operation of the school to his son Ernest Brooks II, who added portraiture, underwater and scientific photography, and motion picture production.

In 1999 the Brooks Institute of Photography was sold to Career Education Corporation (CEC). CEC expanded the school which included acquisition of an 8-acre site former movie production studio in Ventura in 2002, later becoming the Ventura Campus for consolidating the entire school. In 2011 Brooks Institute moved its programs and offices to the new Ventura Campus. In 2014 it moved to the Cota Street campus in Downtown Santa Barbara, before its final move to the Ventura Campus.

Brooks had been experiencing problems with declining student enrollment, accreditation and serious financial losses since CEC had taken over. Last year Brooks was acquired by Gphomestay which specializes in finding housing for students studying abroad.

The final decision to close was made last Wednesday, just one day after Brooks president Edward Clift was ousted. Additionally, a majority of Brooks Board of Directors members resigned last week.

City of Ventura officials, property owners, and downtown business owners had been anticipating the completion of Brooks move to 6 locations within the city. The school was in process of renovating the new locations and occupation of the sites was nearing, however late in July construction was halted.

Mark Watkins, Ventura City Manager  commented “obviously on behalf of the city we were very disappointed on their decision to close we got word last week like everybody else so, everybody at the city was disappointed. Brooks has been a long time partner with the city, and we were looking forward to the opportunity for them moving downtown and bring to the community opportunities and we were disappointed. We haven’t heard back specifically from Brooks since their decision to close. They weren’t keeping us posted on their decision making process. That being said we do have a lease agreement with them for the space and it has many obligations that they must meet including rental amounts and also amounts for tenant improvements We put them on notice as soon as we heard that we fully expect them to meet all of their lease obligations. We fully expect them to meet all their obligations they have with the city.” Added Watkins.

Brooks currently owes the city more than $70,000 in back rent. They also have not paid a security deposit on the building behind city hall. That lease was executed last February. 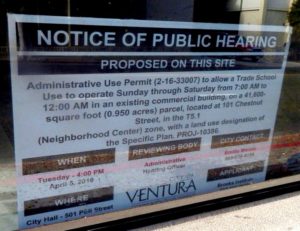 Brooks had already begun renovations on the site and it will take substantial city resources in order to make the space rentable and once again available for lease.

Donna Granata, Founder/Executive Director of Focus on the Masters, who had to relocate to a different floor behind city hall told the Breeze, “The closing of Brooks Institute is heartbreaking on so many levels. The biggest catastrophe in all of this is the effect it will have on the faculty and the students. This event will reverberate for many years to come, not only in the hundreds of lives directly associated with the campus, but at a great cost to our community. Brooks decision to move the campus to downtown Ventura was a great idea in theory, but was so poorly executed without proper planning, financial viability and a lack of transparency. What was supposed to be an economic boon for the city of Ventura, became a financial disaster for all involved.”

Christy Weir, Councilmember, Ventura “We are extremely disappointed in the closing of Brooks. Their proposed move to downtown Ventura was highly anticipated to be an economic and cultural generator. Downtown property owners who were partnering with Brooks to create an urban campus will be impacted by their sudden closing. It is fortunate that we have a thriving, desirable downtown and we look forward to continuing to attract a variety of new and exciting long-term tenants in the future”

Marlyss Auster, Executive Director Ventura Visitor & Convention Bureau “I am so sad about the Brooks news, on so many levels. The excitement of having all the Brookies downtown in an urban campus our team embraced and celebrated. We remained hopeful when the construction was stalled, now the devastating news is all just sinking in.”

Cheryl Heitmann, Councilmember commented “I met a young Brooks student today who told me he had only one semester left before graduation. And I think that is part of the disappointment I feel about Brooks closing.  To make this decision so close to the start of classes seems so unfair to their students.  Of course, it is a loss for our downtown. I think the vision of a downtown campus had real merit, especially for an arts school. “

The school has indicated that this week students will receive more information on the school’s closure, including Brooks’ obligations to their students. The school is opening a transition office to meet individually with each of the 350 current students to help them with the next steps in their education goals.