With regard to the news report of July 5, 2016 in the Ventura County Star, the Ventura voting public needs to keep this news in perspective with how it relates to the citizens of Ventura. This is a City Council that is asking for another $270,000,000 in new taxes to spend anyway they wish.

Today I received my first mailer from the City of Ventura about the ½ cent sales tax they want.  This mailer was paid for with our tax dollars, an irony since the city claims we don’t have enough money, which is why they want the sales tax.  Of course those who oppose more taxes don’t have a pot of money for fancy mailers (wonder how many potholes could have been fixed for the cost of this one mailer?).  We get to write letters to the editor!

Venturans should know that this tax would last for 25 years!  25 YEARS!  And while the city has a list of things it says it would spend the money on, there is NO assurance the money would be spent on these things.  The annual financial audit and the public review of expenditures would happen AFTER the money is spent.  There is no requirement that the city seek approval from anyone before spending the money.

And the “citizens’ oversight committee” will be selected by the city council, so they can stack it with “friendlies” who won’t question their expenditures.  The committee would have no authority to assure that the money is spent on the items listed in the city’s mailer.  The committee could only make recommendations, which the council can then accept or not. The committee’s lack of power was specifically confirmed at the council meeting where the council voted to put the sales tax measure on the ballot.

I am sure we will be getting more mailers about this.  When you get those, think about how much money the city is spending on mailers that could instead be spent on the things we need.  And think about whether you want to lock yourself into this tax for the next 25 years.

We asked the City for a few responses, there will be much more said about this before the November elections for both sides to be heard. These were their comments.

This mailer was paid for with our tax dollars  – The informational mailer is to educate residents about the measure that will be put before the voters for their consideration.  The City wants to be transparent about the measure and educate residents to make sure they understand what it is and what vital services and programs could be funded with additional local funding.

There will be an Oversight Committee prescribed by the proposed ballot measure which would become law should it be approved by voters. The measure states the committee must include seven individuals who must be Ventura residents. Elected officials are excluded. The committee’s responsibilities are outlined in the proposed measure as well, which can be read here:

http://www.cityofventura.net/files/file/meetings/city_council/2016/July/item%2003%20revised.pdf (the Citizens Oversight Committee is included in the Ordinance; located on page 22 of the report)

Decisions on the financial expenditures of the City are the responsibility of the City’s elected representatives who must conduct budget proceedings in public. Budget documents are also made public and independent audits are conducted annually. The value the Oversight Committee adds to this process in assessing the actual expenditure of the measure’s revenues against how those revenue expenditures were prescribed by the ordinance voters approved.

The City Council also appoints members to the Planning Commission and the Council frequently disagrees with the Commission’s decisions and reverses them. 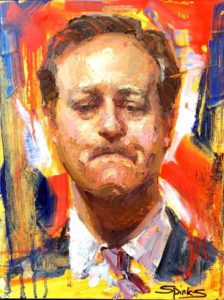 Breaking Bad? Only time will tell on Brexit.   I had just spent a couple of weeks in the U.K. and the whole place was abuzz with would Brexit happen or wouldn’t it? Panic. Fear.   My daughter has lived in the UK for five years now and she was furious and sad at the results.  I felt on the fence a bit but sad that the vote was so close. So like all artists, my inner thoughts suddenly found themselves going on to canvas. I chose to paint Prime Minister David Cameron”s expression just after he announced that he would step down.

No man’s life, liberty, or  property is safe while the  legislature is in session.
~ Mark Twain (1866)