On June 21, at 10:50am, officers from Ventura Police Department responded to a call of a possible purse snatching with the female suspect being chased by a citizen.  Officers arrived and found that the citizen had successfully detained the suspect nearby.

Investigation revealed that 50 year old Oxnard resident Rosemary Gutierrez had entered nearby residence and pretended to be interested in renting the property from the owner.  When the owner allowed her inside, she initially stole a cell phone, but then replaced it.  After doing that, she saw the victim’s purse and concealed it in her own bag.  The victim noticed her purse missing and confronted Gutierrez, who ran.  The victim’s son chased Gutierrez and detained her until police arrival.

On June 24, at 4:45am, a homeowner in the 900 block of Jonquill Avenue was awakened by loud noises coming from their enclosed rear yard.  The victim, along with his dog, immediately entered their yard and found the suspect, 21 year old Saticoy resident Manuel Ambris attempting to hide.

The victim detained Ambris while a family member contacted the Ventura Police Department.   Officers arrived on scene a short while later and took Ambris into custody without incident. 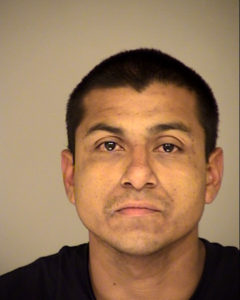 On the June 24, at approximately 3:30pm, the Ventura Police Department Command Center received a call of a subject, later identified as 30 year old Ventura resident Jesus Diaz, who was inside the Bike Depot, 239 W. Main St., attempting to purchase bicycles with a stolen credit card.  Prior to officers arriving on scene, it was reported Diaz left the business on foot, and was still in possession of the stolen credit card.

A California Highway Patrol officer was in the area and monitored the call being dispatched.  He began searching the area and located Diaz on Mission Ave. near Olive St.  The CHP officer contacted Diaz and tried to detain him.  As the officer was placing him in handcuffs, Diaz punched the officer in the face and fled on foot.  The CHP officer, who was not injured, chased Diaz on foot as additional officers responded to assist.  Diaz was captured a short distance away and taken into custody without further incident.

Employees became suspicious and called the person on the credit card and confirmed it was stolen.  When confronted, Diaz attempted to take a different bike and a struggle ensued with one of the employees as he tried to forcefully take the bike.

Diaz also had several misdemeanor warrants out for his arrest.

Assault with a Deadly Weapon

On the June 25, at approximately 7:15pm, the victim arrived at VCMC and reported to the Ventura Police officer assigned to the emergency room that she was the victim of a stabbing.  Rieger was suffering from a non-life threatening stab wound to her arm.  She said the suspect was her sister, 46 year old Ventura resident Colette Reiger.

During the investigation, the victim said she went to the family’s residence in the 3000 block of Seahorse Ave., to confront Rieger about using her makeup.  Both started to verbally argue, during which time Rieger armed herself with a screwdriver.  Reiger stabbed the victim in the arm with the screwdriver.

Officers responded to the residence and took Reiger into custody without incident.  After being medically cleared for a minor injury to her hand that she said happened during the altercation, Reiger was booked into Ventura County Jail for assault with a deadly weapon.

On June 27, at approximately 4am, the Ventura Police Department Command Center received a call from Burke who was the victim of a robbery. Officers arrived on scene and Burke told them he had been walking westbound on Thompson Blvd from Sanjon Rd when he was confronted by two suspects. One of the suspects pulled a knife and demanded his property. Fearing for his safety, the victim gave up his property and the two suspects fled the scene.

The victim went to a local motel where he contacted 911. Officers began searching for the suspects, who were both located in the area. Both suspects were positively identified as 24 year old Oxnard resident Emmanuel Cisneros and a 16 year old Hispanic male from Oxnard, and both were arrested.

On June 28, at approximately 7pm, the Ventura Police Department Command Center received a call from an off-duty police officer reporting that he observed what he knew to be a stolen Ford Raptor pickup in the parking lot of Jack in the Box on Citrus Dr.  The vehicle had been stolen out of Santa Paula.  The officer also identified the subject driving the stolen vehicle as 33 year old Santa Paula resident Nick Wilson, a wanted felon.  As officers were arriving on scene, Wilson had gotten into the vehicle and started leaving the area.

Officers saw the vehicle stopped on Citrus Dr. near Wells Rd, and attempted to conduct a traffic stop.  Wilson failed to yield and a pursuit was initiated.

The pursuit continued, and proceeded to enter westbound on highway 126.  Wilson exited at Kimball Rd., and then continued on several streets on the east end of the city.  He ultimately began driving on Northbank Dr.   Officers then found that Wilson had collided into several parked vehicles near the corner of Potomac and Northbank, and fled on foot.

Shortly after the collision, residents began calling dispatch, reporting that Wilson was running through their backyards in the 1700 block of Powell Dr.  Officers set up a perimeter and began a yard to yard search for Wilson, using the assistance of a Sheriff K-9 Unit.

On June 29, at approximately 8:15am, the Ventura City Fire Department and Ventura Police Patrol Units responded to a call at a residence on Bell Way in Ventura in reference to a child who was injured as a result of a fall from a crib. When Fire personnel arrived on scene the child was found unresponsive and was immediately transported to Ventura County Medical Center. The child was pronounced dead upon arrival at the hospital.

Due to the circumstances of the call, the Ventura Police Department Major Crimes Unit responded to take over the investigation. As a result of the investigation, Ventura PD Detectives determined that the mother of the victim, 27 year old Ventura resident Jessica Navarro, physically assaulted the child and caused his death.   Navarro was booked at Ventura County Jail for 273ab PC, assault on a child causing death.