I picked up my copy of the Breeze for June 8 just yesterday.  I want to thank Scamp for his concern for animals for putting information about the Yulin Festival in his column.  The better educated people are the better chances are of putting an end to this terrible cruelty.  So, Scamp, thank you very much for being so thoughtful and concerned about animals everywhere.

I always look forward to getting new issues of the Breeze.

Hope both of you have a relaxing weekend, but will guess your weekend will be filled with all kinds of exciting things to do.

Yes, it is stupid and shameful when human zoo caretakers need to kill an animal (in their care) because of the mistakes of other human beings.  It was a human mistake (probably the parent’s mistake) for that little human boy to be in the gorilla animal enclosure.  How could a “caretaker” kill an animal in their care?  Where was the “stun gun” to simply let the gorilla sleep until the boy was removed?  It is a time like this that makes me ashamed of assumed human thinking. 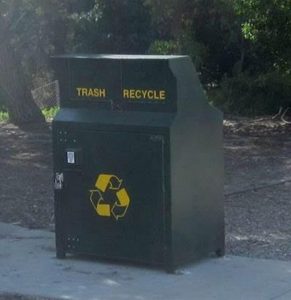 The City is starting to place these locked trash containers around town.  I saw two already in place along the bike path.  As I can attest, if you cut into the vagrants source of income (canning), they will go someplace else.  Hopefully these will be placed all over Ventura.  Now if the City would only put dividers (arm rests) at the center of each park beach to stop vagrants from sleeping on them.

Been meaning to send a thank you for days now, so thank you again so much for getting our notice in the Ventura Breeze…I got several calls again and expect at least four new people to show up! Wo – if this keep up we’re gonna need a bigger room for our  Ventura Parkinson’s Support Group!

Hope you are doing well – sure do love your editorials; I at least find time to read that part!!

Regarding your 6/8 editorial – Legalizing marijuana for recreational use is going to happen, but I also recognize the police chief’s concerns. However, to cite the example of a delivery service being robbed shows how restricted the system is now – the only way most people can easily buy legal pot is through these delivery services. Regulate legal dispensaries locally and delivery services will disappear. Robbers also know the issue with current banking regulations, so legal dispensaries also must deal with how to stash large amounts of cash since banks are currently prohibitive towards accepting these deposits. Eliminating this modern day prohibition is the only way to logically remove the murderous cartels from the equation. Technology will quickly figure a way to measure a person’s intoxication soon enough. The same need spurred the breathalyzer fast enough.

Footnote. So sad about the magnificent gorilla. Being a lifelong Buddhist, it’s part of our collective karma that this happens (also the gorilla’s). Until we improve how we protect and manage endangered species, this will continue to happen.

Artists to my mind are the real architects of change, and not the political legislators who implement change after the fact.