The Star was in such a rush to get the story (Irish Centenary) in the next day’s paper their coverage was superficial and they made serious errors. Their reporter didn’t notice last minute changes to the program and had two wrong captions.   The VC Reporter only gave this unique event a few tiny lines in their calendar because they were busy with Earth Day.

This week the Ventura City Council gave the green light to work on placing an initiative for the November ballot increasing the sales tax one-half to 1%.

Although I support the school district, I believe that lowering the tax rate one half of a percentage point would actually increase sales in town, thus achieving the same result of adding sales tax dollars to Ventura.

For example, the purchase of a $35,000 automobile or kitchen remodel would cost $350 less in Ventura than Oxnard if our tax rate was 1% less than Oxnard. I think this would drive people to spend here considering the savings.

Excessive taxes and business regulations are a damper to our economy. The problem in Ventura is not how much taxes we collect but rather how poorly we spend our dollars. The facebook page Watchdog Ventura is a good platform for studying this issue. I encourage everyone to read it.

We here in Pierpont have seen this before and complained about.  I know you are probably cleaning out the waterline on Waterbury LN since you are doing work on the line on our lane.  But why don’t you capture this water with a water truck and take it to one of the parks that could use the water?   Why are we residents expected to conserve 20% when you are pouring hundreds of gallons of water onto Pierpont BL?   You would think that the Water Department would be making an effort to set the example. 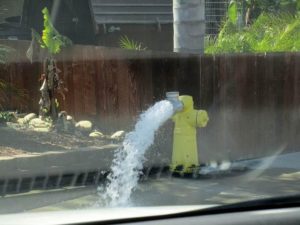 Thank you, Murray, for your understanding of why we are flushing the waterline.  We are actually in the process of purchasing a truck as you suggest and hope to have it by the end of this year.  We will be able to flush water into the truck, treat it and then put back into the distribution system.

You know that that the Breeze is my fav Ventura pub, and you are a most delightful curmudgeon, but really…

Yes, it was the preliminary hearing (proposed 55-unit hillside development) and those us who attended all understood the purpose of that hearing.

The point of the signs was, as it was then, and still is, to draw awareness to the public. The prescreen is over but the bigger point is to keep it fresh in the public eye.

No need to spend more of someone’s generous personal money to do this, in case you’d perhaps like to pick up the tab, to “right this terrible wrong” with the signs to have it changed. 😉

Second, the “exaggerated concepts” that the locals put together were based on only what the development had made public months before the meeting. My impression was that the presentation they made that night had been put together with a lot of burning of the midnight oil to counter what the citizen group put together. The lush green renderings made it look quite appealing, but when has the hillside ever looked as lush or green as that?

Now that we are in a serious drought, let’s all be realistic going in. So many other issues… vacation housing for the retired and wealthy? (the reality) We have plenty of hillside opportunities now.

Kurt: We all look forward to see what their next round of drawings are. Assuming that they choose to continue with the project. We have contacted Regency to learn of the their plans.

After one look at this planet any visitor from outer space would say,
” I want to see the manager.”
~ William S. Burroughs