City councilmember Christy Weir, Mayor Erik Nasarenko and  Pier Into The Future Board President David Fukutomi cutting the ribbon to re-open the pier.

On December 11, 2015 the Ventura Pier was closed due to structural damage from 20’ high waves. The damages included 20 lost timber piles, 19 loose piles, and loss of 40% of the steel and wooden cross bracings. Originally built in 1872 as a wharf for commercial use and once the longest wooden pier at 1,958 feet the Pier now measures 1,535 feet. 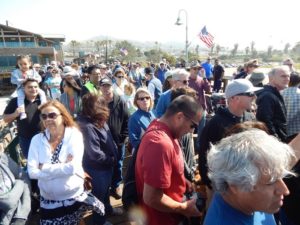 After four months of extensive repair work the Pier is now open to be enjoyed by Venturans, tourists and those who enjoy fishing off of the Pier.

Community members, dignitaries and visitors attended the ribbon cutting ceremony celebrating the re-opening of the Pier.

Congratulations were made in remarks by Ventura Mayor Erik Nasarenko and Pier Into the Future Board President David Fukutomi.

David Fukutomi stated, in part  “Thank you Mayor and councilmembers in attendance Meeks Construction for the great work in repairing the Pier. Pier Into The Future has had a wonderful 23 year partnership with the Ventura. “

“The  Pier Into The Future mission is to serve as an advocate for the pier, raise awareness, and raise funds for enhancements and to help offset operating costs.”

“As the mayor mentioned,  last year we presented a check for almost $140,000 to bring the pier endowment up to $1million.”

“Those funds came from the individuals and businesses in community. Many of you here today have contributed. We applaud the city for taking immediate actions following the damaging storms to prevent further damage.”

He also specifically recognized  the Pier Into The Future board members who were present.