Erik Nasarenko was selected as Mayor by the City Council in December, 2015.

Mayor Erik Nasarenko, who is a deputy district attorney for Ventura County, was right at home making his case before a City Council meeting at his first State of the City address, and at the annual Ventura Chamber of Commerce’s State of the City Breakfast held on Thursday, March 10 at the Crowne Plaza Ventura Beach.

The mayor’s  “Invest in Ventura, Now and for a Strong Tomorrow” theme discussed the present and future of Ventura and laid out a case for a one-half sales tax increase in Ventura. 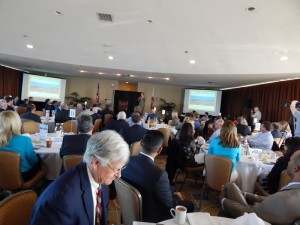 “The State of the City address is the perfect opportunity for the business community to engage with City Hall and hear directly from the Mayor about his priorities and vision for the coming year,” said Stephanie Caldwell, President and CEO for the Chamber.

In his State of the City presentations, Mayor Nasarenko gave credit to each council member for their contributions to Ventura.

He pointed out that an independent auditor gave Ventura a “clean” opinion for the fiscal year that ended June 30, and to balance the budget, the city no longer transfers money from internal accounts to the general fund.

“We are indeed managing our money wisely,” he said. “The city’s main source of income is from sales and property tax collections. But once the state and others get their share, Ventura is left with 13 cents on the dollar from the sales tax and only 16 cents for every dollar in property taxes.”

He stated that Ventura has greatly reduced the number of employees necessary to balance the budget, but said more money is needed for many things including:

Infrastructure – sidewalks, streets, underground utilities – that are in need of major repair.

The need for a new library to replace Wright Library that was closed several years ago.

More police officers are needed to control the 1,000 known gang members from the 100 known gangs in Ventura. Gang intervention officers were reduced from 7 to 2 in our current budget.

The fire department needs more funding to keep all of its stations open, especially Fire Station 4 that requires funds from outside sources to remain open.

Last fall, the City Council voted to spend up to $80,000 on a campaign to get public support for a sales-tax measure. The Council will likely vote in June to officially get it included on the November ballot. Most council members have already expressed their support for the measure.

In conclusion, Nasarenko said, “Invest in Ventura, join us. We are going to pass this. We’re going to get this on the ballot.”