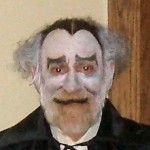 •  There are new 25 MPH signs on Poli St. to reduce driving speeds. Because it is a quicker way to travel East and West, the street is used more like a highway then a residential street. In fact, it is used by a lot of people after downtown bars close. There is less chance of being stopped by the police then by using Main or Thompson. My son recently got a speeding ticket on Poli, doing 40 MPH, and the ticket cost with traffic school included is just over $300. So, beware.

I have suggested this idea previously. Since Poli runs through Ventura High School, the street is closed-off during school hours. Drivers then use Main and Thompson to go East and West as they should.

Why not just permanently close Poli at the school and make it part of the campus? Would make the school much prettier and safer and would definitely slow down traffic on Poli. It works now when the street is closed off so why not make it permanent? The VUSD would need to purchase one, or maybe two homes to accomplish this.

•  Thanks for your many opinions sent in regarding Regency’s proposed 55-house hillside project. I’m not sure why people think that I am supporting the project at this time based upon my comments. I do not know if I am for or against it yet. When I have a final opinion about whether I think it is good or bad for Ventura, I will let folks know.

I have received several emails from people who oppose the project and Regency has received many letters supporting it. In a future issue we will have much coverage about the project.

One of our writers and I recently met with Regency to see the proposed development plans and to hear what they had to say about the project. Their presentation was very professional and well-articulated. Their presentation is much more than is actually required by the City at this time in the very preliminary approval process.

Readers have been writing to me in opposition and some want to meet to show me what is wrong with the project. I appreciate the feedback, but because I have been an architect for 47 years, I will be able to review the plans and make my own decision about the merits, or downfalls, of the development.

I also understand that this project will not be what I consider “executive housing”. I was merely pointing out that Ventura needs “executive housing.”. This will certainly be luxury housing, and it might be as close as we can get with the limited land available in Ventura. Though, there is land in Ventura’s “sphere of influence” that could be looked at for executive housing at some point.

•  Regarding future building developments, on September 16, the Ventura Local Agency Formation Commission (LAFCO) voted unanimously to annex property into the city of Ventura, marking an integral step toward development of a 70-acre project known as Focus Area One.

Focus Area One is more than 100 acres in total and includes the current Ventura Auto Center and Olivas Park, which will become a state-of-the art commercial district that will serve the City of Ventura and the region.

“This is an important milestone in our progress toward fulfilling the City’s goal of developing destination retail adjacent to our Auto Center,” said Mayor Cheryl Heitmann. “The proposed development will complement the Auto Center and will provide sought-after services to our residents.”

The LAFCO action amended the City of Ventura’s sphere of influence to include a 6.65-acre site, which formerly served as the Montalvo Community Services District wastewater treatment facility. The Montalvo plant will be decommissioned and demolished, allowing for the construction of a new road and levee that will facilitate development of the new project.

“The City has collaborated with the private investment community for years to design and construct the infrastructure needed to support development at this site,” said City Manager Mark Watkins.  “This latest action is a victory for the project and for the City as a whole. This is a high-profile development site along the 101 corridor; it will be a great asset to the City,” said Watkins.

•  As I’m sure you have heard, there was a proposal to include some paid parking in the Downtown parking structure. I hear people against this idea saying, “look what happened when they put parking meters in Downtown. Look what they did to business.”

So, conducting an impromptu experiment, I wanted to see first-hand the impact they are having. I drove Downtown (11:30am on a Wednesday) and counted the empty spaces (not including the 24-minute parking spaces). There were 3 empty spaces on the North side of Main and 5 on the South side. A total of only 8 empty spaces, so the parking meters have had little, or no effect on people parking in Downtown.

The good news is that Ventura’s City Manager has released a statement announcing negotiations are continuing, but settlement options for the Santa Clara Parking Structure do not include paid parking.

According to Watkins, “Over the last few weeks, the City has heard from concerned citizens about the proposed changes to the Santa Clara parking structure. We recognize that this is a significant issue that matters to our community. Listening to the voices of our residents, we are further negotiating with the interested parties to continue to explore options that do not include paid parking.”

In addition, Watkins announced the parking structure item has been moved to the City Council meeting scheduled for Monday, Nov. 2. It had been scheduled for Oct. 26.

The park plans to replace the existing pier to provide safe accessible, efficient, and sustainable access for visitors and park staff.

Public involvement is essential to the success of the project. Interested individuals, organizations, and agencies can submit comments at www.parkplanning.nps.gov/ScorpionPier.

•  Once again, Ventura is considering a sales tax increase to be included on the November 2016 ballot. Our current sales tax rate is 7.5%. The City Council voted to spend a maximum of $80,000 to launch a campaign to inform/educate Venturans to persuade them to vote yes in this election.

A private survey conducted recently shows that a majority of Venturans would approve an increase if the revenue generated would improve essential city services. Only a simple majority is required to pass this sales tax increase. Depending on the amount of increase (1/2% or 1%), the new revenue could reach an estimated $10-$20 million a year.