∙ I have consistently asked readers to send comments explaining why they don’t agree with my comments in my pub letter. An exchange of ideas is the backbone of a democracy. It seems lately that an intellectual, logical discussion can’t be held between those who have different opinions. This is bad for our democracy and country and is slowly (maybe not so slowly) tearing us apart.

There was a time when we could all express ourselves and disagree in a mature adult manner. But, that started changing with social media because we can insult people we don’t even know with no repercussions. That has been greatly exacerbated because of Donald Trump (my opinion, let me hear yours). Just too much anger to have a civil conversation.

I do receive emails disagreeing with me, but they usually start out by stating, “You’re an idiot”, so I never publish them. I’m not an idiot for having my opinions and readers who have different opinion are certainly not idiots. Again, I’m happy to publish reader’s opinions that express ideas without name calling. 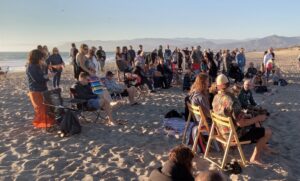 On September 24, a memorial service was held at Surfers Knoll for the most wonderful Breezy Gledhill. It was attended by family and few of the many people that loved this amazing lady. She will always be in our hearts.

∙ Incumbent City Council members Mayor Sofia Rubalcava and Jim Friedman have chosen not to run for another term. That means Districts 1 and 5 will have new representation. Two other current council members are also running in their districts which means we could potentially have 4 new members if they are not re-elected.

∙ After months of public demand for transparency, the Ventura City Council will consider a review of city officials’ travel and credit card expenditures.

The review and audit came after a City Council trip to Washington D.C. last year when 5 council members traveled to the National League of Cities Conference. The trip was not properly placed on an agenda and included discussions about city issues which was a violation of a state’s open meeting law (the open meeting law is the Ralph M. Brown Act, which requires legislative entities of local governments and agencies—for example, city councils and school boards— to conduct business in a way that enables the public to scrutinize government decision-making when there is a quorum present).

City Manager Alex McIntyre has apologized for giving the council bad advice about the trip (and its expenses) that led to the violation.

The Ventura City Council unanimously decided to hire an independent auditing firm to review meal and travel reimbursements, city credit card usage and other spending. The Finance Audit and Budget committee, which has three council members, will request proposals from auditing firms and return to the council within 60 days with options and a recommendation.

Mayor Sofia Rubalcava stated, “Public trust and fiscal responsibility are crucial to effective government and the goals of this audit. Policies are created to ensure that the use of public funds is transparent and appropriate. This audit is a citywide review of how we are doing at following safeguards, policies, and procedures.”

Some are calling for the resignation (or firing) of City Manager Alex D. McIntyre. I feel it is much too early to even discuss this. Let’s wait until the results of the report from the outside consultants. The city council hires and fires our city manager and city attorney.

∙ The City Council unanimously approved a new six-month program that will help Spanish–speaking residents better understand city council meetings. Kristian Nunez, a policy advocate for Central Coast Alliance Unified for a Sustainable Economy said the program will help Spanish speakers in places like the Westside or Montalvo who are left out because of language issues. “Even if families or individuals do not speak or give public comment, when they attend, they need to know and understand what’s going on and what’s talked about in their respective communities.”

∙ Apple Senior executive Tony Blevins has been fired after saying he fondles big xxxxxxxxxxxx women for a living (he thought he was being funny). Trump basically said the same thing and he was elected president. Does this mean being an Apple executive is more important than being president?

∙ Gov. Gavin Newsom signed two laws that would open up much of the state’s commercial land for residential development. It’s a long-sought victory for affordable housing advocates, who say such sites are ready-made for apartments because they are often near populated areas and come with ample parking.

Newsom stated, “This is a moment on a journey to reconcile the original sin of the state of California, and that’s the issue of housing and affordability. We need to all be a little bit more accountable to this crisis of affordability.”

Many local government officials say the laws (and other new state mandates regarding housing) undermine local authority and planning that better reflect community needs. Does this mean general plans need to be revised? Will there be new zone designations that allow residential living in commercial zones? Look forward to hearing from Ventura planning about this issue.

∙ The newly built veteran’s clinic has opened at 5250 Ralston Street. It has 50,000 square feet and is run and staffed by the VA, which is preferred by veterans. The Ventura facility will have services including dental care, physical therapy, rehabilitation, eye treatment and audiology. Veterans say the new care will mean fewer long trips out of the county to other VA facilities.

This is really wonderful.

This is a critical part of the General Plan update process, since the land use map directs the future pattern of development in the City. The land use alternatives are being developed to implement the Vision endorsed by the City Council and address issues of concern in the community, particularly affordable housing and economic growth.

I encourage all of you to take the survey and attend upcoming workshops or meetings to learn more about the General Plan (see Gov. Gavin Newsom above).