The Ventura community gathered on July 10 to support injured firefighter Myles “Danny” Smith with a fundraiser and raffle. Captain Smith was severely injured while fighting a brush fire in 2015, and forced to retire. Since then, he’s continued to battle his injuries and most recently had a leg amputated as a result of his injuries due to a lack of blood flow.

On April 12, 2015, Smith was responding to a brush fire near Highway 33 when he fell backwards 15’ into a concrete drainage ditch. The fall shattered his arm and fractured his hip. Smith has undergone many many surgeries since the accident. 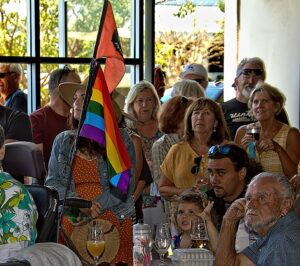 Friends, family, and colleagues were all there to help with his medical costs and the costs to make his home more accessible. It was held at the MadeWest Brewery at 1744 Donlan St.

“Danny pushed me to become a firefighter and helped me along the way,” stated fundraiser organizer and Ventura County Fed Fire engineer Chris Botelho. “His family has always stepped up to support the community and help others…now it’s our turn to return the favor to them.”

“Our mission is to serve Ventura firefighters and their families,” said Joe Booth, executive director of the Foundation. “Community support for the event has been amazing – so many businesses have donated raffle prizes – we’re excited to have a fun time on Sunday and help raise money for a great family.” The Ventura Fire Foundation is acting as fiscal sponsor for the event.

More information is available at www.venturafirefoundation.org