David is a 78 year young, retired gentleman, born in Anchorage, Alaska where he grew up in the dark and cold. He left Alaska at the age of 18, after one year at the University of Alaska, and went to the University of Colorado where they had an Architectural Design Department and beautiful mountains for skiing, which he loved.

After graduation he emigrated to Australia and began his career as an Architect. Returning to Colorado a few years later he started his own firm, David Barber Architects.

After fifty years of designing stunning custom homes and office buildings, he found himself becoming more frustrated with the ever-expanding bureaucracy associated with his work, and decided it was time to retire. He loved the creativity involved in his work and would look for other ways to satisfy his artistic life, without the stress of being a busy Architect.

Like many people, he just didn’t know what to expect when he retired. What would he do? How would he fill his time? Once retired, at the youthful age of 74, he decided to hit the road in a small motorhome, visiting most of the National Parks in the West. He eventually settled in Ventura, near the harbor, with his dogs, Ruby and Doodles. He liked the weather, which suited his outdoor activities year-round.

He wakes early and walks his dogs as the morning light peaks through the fog and low clouds. He is grateful for his good health, which allows him to hike, bike and play golf (even though he says he “never plays very well.”) But “Golf is not a game of perfect”, David says, and he continues to play as often as he can. He walks the golf course and carries his golf bag, getting a good walk and a good workout as he plays. 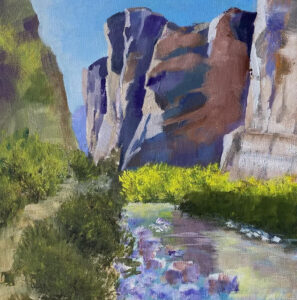 He is also excited about his oil painting hobby which satisfies his creative need. He loves to paint scenes of the many National Parks he has visited and the mountains of the West. He often dreams about painting, he says, and cannot wait to get up and get to his easel.

Motivated by anything that involves learning, David is currently studying Italian for his up and coming trip to Italy with his son’s family. He would really like to order a cup of Cappuccino in Italian and be able to say ‘Grazie!’ with flair.

David never feels lost or unhappy and cherishes the memories of his successful architectural career. His transition to retirement was not without its own challenges, however. He had to find activities that were interesting and which included learning and creativity to keep him busy and mentally engaged. As part of his day, he does the New York Times Crossword Puzzle.

He learned through meditation and painting to be and stay positive and is happiest when he is walking his dogs, bike riding, having stimulating discussions with friends and “learning something new every day”, which he says is his key to happiness. That, and the thought of hitting a ‘Hole in One!

Editor: If you are a senior (over 70 please) or know of one who would like to share their retirement or job let us know at editior@venturabreeze.com.