In the current experiment, heat transfer is being assessed.

The eighth-grade science classes at Ventura Missionary School, taught by Alane Woods, are, instead of reading textbooks and theory, actively engaged in building experiments designed by Quest for Space who then shares their information with NASA. Along with other students’ works worldwide, these experiments provide valuable information to be used in research.

Ms. Woods has been utilizing Quest for Space Inspiration Station kits for six years now, with great success. Students are enthusiastic about getting to experience first-hand various elements of science, engineering, coding, and more. The day I visited the classroom, the air was literally electric with excitement. 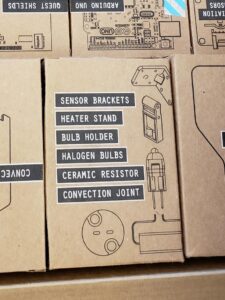 In the current experiment, heat transfer is being assessed. Which color transmits heat faster and more effectively – white or black? How is this information used in space? Are there differences between how earth and space transmit heat? Are there differences among the planets as to how heat is transmitted? Students learn about the process, the types of heat transfer, and how heat is conducted.

First, I was treated to a “walk-through” by two of the students, Isabelle and Drayden. Their excitement about the experiment was palpable. Both extoled the virtues of working in teams and of learning the different elements that must be considered. They gave me a quick tour of a completed unit, explaining how it worked and how the information is ultimately sent to the International Space Station (ISS) to be used in space endeavors.

Split into teams, each team receives a boxed Quest kit. Each kit contains Step-by-Step instructions and all the parts needed. Each team builds the same experiment and then compares results.

The kits require the building of complex circuits, resistors and connectors to run the experiments. Progress and process are logged. Each member of each team is assigned a specific role and may fill in other roles as needed.

I stopped by each team to observe and learn where they were in the process. I was immediately struck with the focus, the enthusiasm, the willingness to share and the respect shown by the students.

When the conductor is built, computer coding enables the results to be fed to Quest for Space which then sends it on to the ISS. Students learn the results of the work their team has done. The information is then compiled with other research results.

“Students learn not only how to use science, but also why, and that their input to the scientific world is valuable” stated instructor Alane Woods.

“As an orbiting laboratory, the International Space Station (ISS) offers researchers around the world the unique opportunity to perform experiments in microgravity and under the rigors of the space environment. Scientists have used the station for everything from testing technology for future space exploration to studying human health.”

More than several students shared that their favorite part of the experiment is the teamwork and the coordination of the many components of hands-on work. One contributed that the best part for her was “doing the electrical, hooking it up and seeing the light come on. You know it worked!” Others stated, “It’s a really cool thing” and “It’s fun, it’s cool, actually being able to put it together and see how it works.”